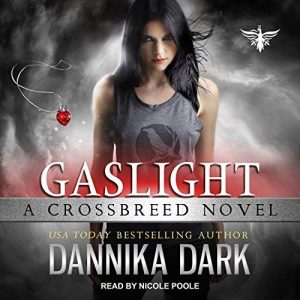 If you have not figured it out yet, I’m a huge fan of Dannika Dark and Nicole Poole. I have listened to all of Dark’s books. It’s pleasure to listen to Poole narrate them all. Poole continues to breathe life into the characters of the Crossbreed series. My favorite voice she brings to life is that of Christian Poe. It is hard to find a female narrator who can deliver great male voices as well as female ones.

The previous book Deathtrap and this one, Gaslight have brought some sadness to Raven and Christian’s backstories. These two are broken in many ways, but they are survivors. Watching them fall in love is a joy that makes me laugh, cry and what to give them both big hugs. They are learning to trust in each other even if they can’t help, but keep people at arm’s length.

The Keystone group has become a real family and this cast of misfits really needs a family. They would all die for each other and I love seeing them work together and grow as individuals as well.

Dannika Dark has cemented her place on the top of my auto-read authors and I will always prefer the audio format as long as Nicole Poole continues to narrate. 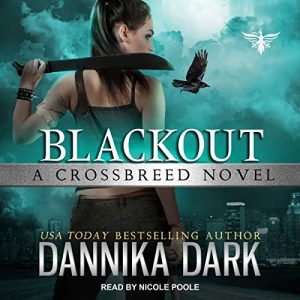 I must say I was a little mad at Raven for her actions towards Christian at the end. These two are not going to go easily into that HEA which makes it feel like something they both have to earn. It reminds of me of that old saying, “Something worth having, it worth working for” and these two are working for it, but there will be some setbacks.

Nicole Poole does another amazing job with the narration. Her ability to deliver consistent voices for the characters are just phenomenal. She pulls the emotions out of me when I’m listening.

In Blackout, Raven and Christian work to get the lights back on in the city. Supernatural breeds go nuts when the lights are out. The streets are dangerous and anyone with a brain would stay safe behind their closed doors, but Keystone has work to do.

We get more information about Raven’s maker. He has been keeping tabs on her since he left her a few years ago. He’s a villain who believes he is the good guy, a very complex character who has showed up in the series, but to us the readers and Raven we don’t know who he was until now.  He put a big wedge between Raven and Christian.

Dannika Dark is not big on cliffhangers, but there’s a tiny one at the end of Blackout. I have ideas of what is to come and if this was any other author I would worry about things being dragged out, but I have total faith in Dark to deliver a great story in Nevermore.

Gaslight:
Vampire trafficking is a sinister business, and nobody knows that better than Keystone. After Raven discovers hidden clues in a cold case, the group sets a trap in hopes of catching an elusive criminal. But when the plan backfires, Raven’s world is thrown into chaos, and Christian’s loyalty is put to the ultimate test.

Buried secrets come to light, and the only thing keeping Raven grounded is her insatiable thirst for vengeance. The stakes are high as they travel to a place where the landscapes are as treacherous as the immortals who live there. This time, there’s no room for mistakes.

Will Raven have the courage to tame the violence in her heart before it swallows her whole?

Blackout:
The fate of millions rests on Keystone when they embark on their most important assignment of all…

After what was supposed to be a simple job, Raven and Christian uncover a sinister plot against the higher authority, and the stakes are as high as the body count. The assassins are merciless, with anyone who stands in their way becoming collateral damage. Meanwhile, Raven is still struggling to make sense of her feelings for Christian following a memory wipe.

During a blackout, the city erupts into chaos. With Breed on the brink of war, Keystone has only twenty-four hours to complete a secret mission. Raven seeks help from the most unlikely of places, but at what cost?

It’s a race against time to save lives in this explosive installment of the Crossbreed series.