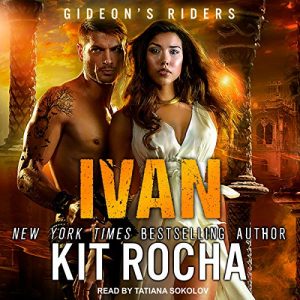 Ivan is the third book in the Gideon’s Riders series, and the romance between main characters Ivan and Maricela has been brewing since the first story. Theirs is a star-crossed romance of sorts: she’s a royal princess with obligations to her family and people while he’s one of the Riders, a commoner with a tainted past. With Ivan assigned to be Maricela’s personal bodyguard, the pair grow incredibly close, and the sparks that flared before this assignment grow and ignite. It’s a taboo relationship in more ways than one, yet once they give into their desires, the pair cannot stop and step away.

As with the previous books in this series, the primary romance is powerful and strong, but tempered by the harsh conditions of the world. Maricela lives in a gilded cage and Ivan lives under the weight of the sins of his uncles. The pair must deal with the realities of her position and his family’s legacy, and I like that the authors don’t tie things up with pretty bows. This creates powerful emotional reactions and a stronger romance in the end.

My one complaint this time around is the sheer volume of characters and important figures tossed out at the listener. The politics of Sector One are made all the more complicated by the number of players on the field, and I had a tough time keeping it all straight. The authors are weaving a web and setting the stage that will provide fodder for books to come, but I struggled to keep up at times.

Narration: the book is shared via 3rd person POVs; primarily Ivan and Maricela, with a few other supporting characters. Regardless of which POV is narrating the chapter, Ms. Sokolov uses a neutral feminine voice, and it is easy to follow and pleasing to listen to. Ms. Sokolov alters the voices for each character during dialogue, with each voice mildly distinctive from the others. Her male voices are appropriately deeper and not overly feminine; however, sometimes the males sound similar. The female voices are similar to the narrator, but distinct enough to separate out. The only time I had difficulty discerning who was speaking was during times of heavy dialogue between two characters of the same gender.

In the end, I enjoy Ivan and Maricela’s story. They fight for their love, which in the end, makes it all worth the listen!

As the sheltered princess of Sector One, Maricela’s life is defined by duty: to her people and to her family. Her wealth and influence have allowed her to build a better world, but they come with a price—the responsibility to secure political stability with a practical marriage. Maricela cherishes the idea of marrying for love, but there’s not much romance in the endless line of suitors interested only in prestige and power.

And her handsome, brooding new bodyguard isn’t helping the situation.

Ivan is the perfect, deadly warrior, a man trained from childhood to be the ultimate protector to the Rios family. His focus on keeping her safe is intense–and a little intoxicating. When the threat of danger cracks his icy control, Maricela realizes she’s not the only one fighting against temptation.

Ivan knows that the blood on his hands makes him unworthy of the pure-hearted princess. But from the first kiss, their forbidden affair feels inevitable. He can give her a glimpse of life outside her gilded cage and a lover who wants the woman instead of the crown. The only thing he can never do is promise her forever.

Because spurning her noble suitors to marry her bodyguard wouldn’t just be a scandal. It could set off a political firestorm that would tear Sector One apart.