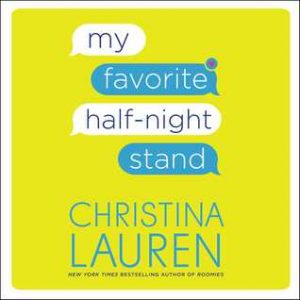 My Favorite Half-Night Stand is another wonderful story from the writing team of Christina Lauren. The characters are silly and fun, yet have realistic problems that ground them and make them more relatable. Millie and Reed have been best friends for a couple of years. Their group of four guys and one girl is tight and has always worked smoothly. But suddenly, Millie realizes she’s desperately attracted to Reed, so after a few drinks, Millie makes a move and the pair spend a passionate half-night together. Determined not to make things weird, they both go along with the group’s plan to find dates using an online dating site. But when an undercover Millie (Cat) gets matched with Reed, and he doesn’t figure it out, things get out of hand.

While I found it slightly difficult to believe that Reed didn’t figure out Millie was Cat right away, especially since they are such close friends and he is having serious relationship thoughts about Millie, the story works. The conflict grows because the more Millie divulges to Reed as Cat, the more distant and aloof Millie becomes, causing Reed a lot of hurt. He really wants Millie, just needs more from her and she would pull away, and then would turn around and open up as Cat. The misunderstanding continues to grow, and just about the time I was ready to say “enough,” the authors brought the situation to a head. Reed’s reactions and hurt are palpable, and I felt empathy for both partners.

The supporting characters add a lot of value to the story. Watching their group dynamics and how each member plays his role in the larger picture makes My Favorite Half-Night Stand more than just a fun romance. They struggle watching what happens between Millie and Reed, showing ripple effect that Millie’s little plan has on those around her. I would love a follow up story to see how the rest of the gang finds their loves.

Narration: the story is shared via first person, present tense, shifting POVs of Reed and Millie. Having two different narrators for this type of story telling works, as it is clear whose POV I am listening to at all times. Each POV from Reed is Mr. Lee and each POV from Millie is Ms. Thibodeaux. Both have pleasing cadences and tempo. Both use voices that are dynamic and well-suited for the mood and plotline. There isn’t a huge difference in Ms. Thibodeaux’s female voices, but there also aren’t very many female characters. Honestly, she doesn’t use much difference between any of her character voices – males are slightly deeper, but not entirely. Again, it’s more the intonation of words and speech patterns that make her males “male.”  And this all applies to Mr. Lee’s in reverse. Yet it all works. I didn’t get confused unless I came back to the book after an absence and it was the middle of dialogue.

With a world-famous speaker at their university, Mille Morris and her four woefully single male colleagues make a pact that they’ll all find dates. Unfortunately, Millie has more success helping them make matches online than she does navigating the onslaught of lewd pics in her own feed. But when she creates a fictional name for a new account, Millie finds herself vying for the online attention of a man she sees every day in the flesh.