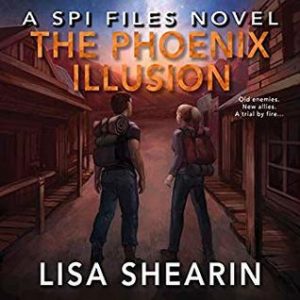 Having read/listened to the SPI Files since the beginning, I’ve found myself frustrated with the past couple books, yet I wasn’t quite ready to say goodbye because I’ve always enjoyed the mythology and world that Ms. Shearin created. With that said, I am happy to report that The Phoenix Illusion went a long way to restoring my enjoyment of the series.

The book opens shortly after the conclusion of the previous title, The Myth Manifestation, with the SPI gang celebrating Mak’s birthday, when all of a sudden a burning building appears out of nowhere on a previously vacant lot. The team jumps into action, discovering that there have been a series of disappearing buildings in remote areas, all leading back to both the Goblin home world and what appears to be a cabal of evil “most wanted” mages.

Rather than give a side-by-side comparison of my previous issues with the books and what was different this time around, I’ll just say that things are much better. However, I still had issues with the amount of repetition in the storytelling, but the overall backstory repetition was limited to the first chapter, which is key for those who either are new to the series, or haven’t listened in a while. I do wish that Mak would cut back on her lengthy explanations and repetitive reminders because I’d rather live through her experiences, not have her explain them to me.

Regardless of the repetitive talk, the overall story is action-packed and interesting right from the get go. The SPI team is stumped as to what is going on, so they form a team to help them solve the case. I enjoyed getting the different “expert opinions” and theories as the group worked to figure it all out. I also liked the addition of this mysterious cabal – bringing in past baddies from the series who have given the slip to SPI in previous books.

Another shining spot in The Phoenix Illusion is the amount of time spent with Mak and her goblin boyfriend, Rake. In the past few books, the pair were supposedly a couple, yet they felt more like friends based on their page time and how they interacted. Ms. Shearin leaves no doubt about the status of their relationship right from the get go. There is more affection, time spent together, innuendos, and Mak thinking about how much she cares for Rake.

Narration: Ms. Parker continues to be a shining spot of the series and is the voice of Mak for me. With the story told from the first person POV of Mak, we are privy to her every thought. Ms. Parker’s southern accent and “sweet as tea” narrative voice is perfect for Mak. Ms. Parker gives each character a different voice, although some male voices are similar. She switches up her accent and cadence depending on the character, and is able to infuse emotion into all characters when called for.

Overall, I enjoyed The Phoenix Illusion and I’m looking forward to finding out what Ms. Shearin has in store for Mak, Rake, Ian, and the whole SPI gang.

The agents of Supernatural Protection & Investigation (SPI) are used to dealing with the weird and the wacky, but even they are stunned when a building from another world suddenly appears on an empty lot in New York…

I’m Makenna Fraser, seer for SPI, and it’s just my luck that my birthday party is literally crashed by a building from another planet. And it’s not just any building—it’s my goblin boyfriend’s house from his home world. SPI’s mission, to keep the public clueless about the supernatural, has us scrambling to find who did this and why, not to mention how.

The deeper we dig, the more we realize this incident is the opening gambit to a much larger event. Old enemies have combined forces with an even older nemesis to develop the means to kidnap an entire building and everyone in it. But who, or what, is their ultimate target? Finding out and getting to the mark before they do will require all hands on deck, including some extraterrestrial help from the goblin home world. We’re running out of time, and if we can’t get our act together, we’ll have front-row seats for the end of the world as we know it.