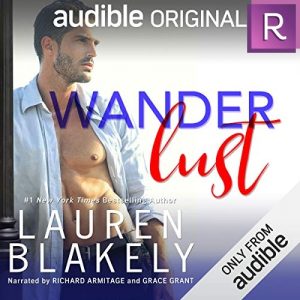 Wanderlust, in the first full-length novel in the Part-Time Lover series by Lauren Blakely.

What happens when an American gal moves to Paris for work, who thinks she will be safe from sexy British accented men but finds her French interrupter is a sexy man who happens to be a Brit? Yep, a formula for things to heat up. Especially when that Brit has a thing for American accents.

Wanderlust is a story of languages, the most important one being that of the language of love. After Joy and Griffin realize they will be working together, they decide to stay friends for the three months he will be her interrupter. But we all know that when two people who have strong chemistry, that won’t last long.

Joy is making her dreams come true by living and working in Paris. She believes that her limited French will get her by in the city of love, but she realizes fast she needs Griffin for the smallest of things like buying contact solution. She has a small meltdown on her rooftop with some wine but then asks Griffin to spend time with her outside of work to help her learn the language so she can be independent. With Griffin working on a bucket list that bonds him with his dead brother, he sees an opportunity to mark one thing off the list, helping someone he cares about to achieve one of their dreams.

While the two hang out in social settings their chemistry grows and they believe they can be happy with the now. After spending time growing closer they fall in love, but Griffin has plans to move on to another item on the bucket list. Will it take him away from Joy? You’ll have to listen to Wanderlust to find out.

Grace Grant is an old favorite of mine. Grace’s narration always sounds like she has a smile on her face in the happy moments and a pained look when there’s a sad moment. She brings out the emotions from the characters like they are her own feelings.

Richard Armitage is a new narrator for me. I wondered if he was really British because he slipped in and out of three accents; British, French, and American. When I looked him up I knew who he was by his face. I’ve seen him in movies/tv before and he is indeed a native British speaking person. I really enjoyed Richard’s POVs for Griffin. I look forward to listening to more of his work.

Side note my son has been watching Castlevania on Netflix and one of the main character’s voices sound very familiar…. It was Richard Armitage! It’s always fun to hear a narrator’s voice in another format.

My Ratings:
Story: B
Narration:
Grace Grant: B+
Richard Armitage: A-

A charming British hero, the woman who tempts him, and a hands-off arrangement that’s oh-so-hard to maintain.

My bags are packed and I’m ready to go. All I have to do is board a plane, and I’ll be on my way to fulfilling a promise I made long ago. Bonus points — my last week in Paris looks to be even better when I meet a gorgeous, clever American woman and make plans to take her back to my flat that night.

But before we can get together for what would surely be a fantastic final fling, my boss hits me with a double whammy. My previous client didn’t pay, so there’s no trip, and the new client I now desperately need is none other than the tempting American I’m about to take home.

Have I mentioned this timing bloody sucks?

I’ll admit it — I have a big weakness for a hot British accent. As in, they make me swoon, sigh, and want to toss my panties. Good thing I can avoid that kind of temptation in Paris. So it’s just my luck that the man who’s the key to success in my new job is the man whose voice makes me melt. Oh, and we have to spend all our days together for work.

Thanks a lot, fate.

To top it off, I quickly learn he’s witty, kind and has a heart and mind I’m falling for fast.

All I have to do is resist him every single freaking day. That’s so easy. Not.

But then I learn that’s nothing compared to the real hurdle we face.

What could go wrong with falling in love in Paris? Nearly everything, it seems…