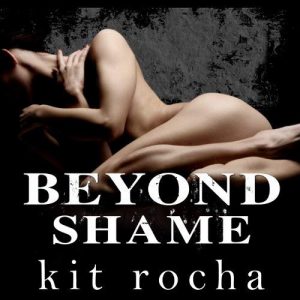 Noelle is virgin from Eden, the place where the rich live in this post-apocalyptic setting. The people in Eden live without touch, the casual or the kinky kind. Noelle is like many in Eden, she is starved for touch. She is kicked out because she went to a party where others like her were exploring their needs.

Jasper is a master of touch, but doesn’t want to settle down with one woman. Until he meets Noelle. She gets under his skin and into his heart. Jasper is a hard man, being the right-hand-man to the leader of Sector Four, but when it comes to Angel from Eden, he is brought to his knees.

The Beyond series features tons of sex scenes with the main couple and often other characters join them, but the main focus is on the couple of each book. Beyond Shame is a great start to the series, it lays out the land as far as the world building and sets the tone for the relationships. 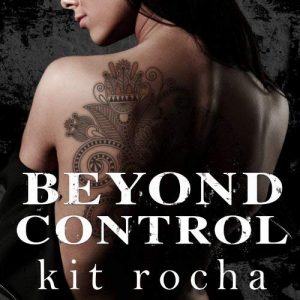 Beyond Control is centered around the leader of the Sector Four, Dallas and his would be queen, Lex. We are introduced to the couple in the first book, Beyond Shame. So if you start with that book first (and why would you not?) you get a feeling for the couple and how they are fighting their feelings for each other. Sure they are all about the sexy times with each other and other people but they have not taken that final step with each other.

“The first time he buried his cock in her, no one else would be watching. He’d been waiting too long to share any part of that first time, even the sight of her coming for him.”

Dallas doesn’t share his collared women with anyone. When he collars a woman he sleeps with her in private and it usually only last for a few weeks. That’s one of the reasons Lex has never been collared by Dallas. The other is she’s not going to let any man own her, but most importantly she wants more from Dallas than a few weeks. Even if she will never admit it to him or herself.

Watching Dallas and Lex make their way to their HEA is like watching a bag of cats fight. Sure it could be fun in theory, but you know someone is going to get hurt.  The emotional tug of war between the two is so draining, but in a good way. Not to mention the sex. What do you call a sex scene with six people? HOT AS HELL.

Beyond Control tested my control . . . I needed to put my face in the freezer a few times. Lawd it was hot and when I’m in need for some steamy reading, I’ve bookmarked a few scenes to re-listen to at a later date 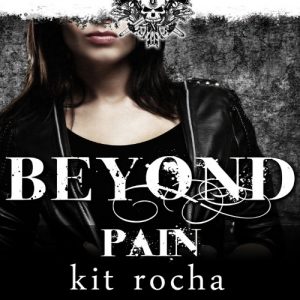 Beyond Pain has a heroine who has been abused and needs help learning to trust. The hero isn’t sure if he is the right man for the job, no he doesn’t think he deserves to be the man to help her trust again.

Six is tough as nails and Bren loves pain, but he is no submissive. Six cannot be submissive, but wants to learn to give Bren what he needs (they get a little help from the friendly neighborhood tattoo artist in one hot scene). Both go through growing pains learning how to give and take with each other. They dance around each other until Bren believes Six is ready to take the dance to the bedroom. Once they work through a few issues their romance is a beautiful thing of trust and love.

So far Bren and Six is the only couple who is not up for “sharing”. Although there have been some group activities the main characters usually only have sex with each other but there is plenty of oral and petting between friends. Six doesn’t want to anyone but Bren touching her because of her past and he doesn’t want to share her with anyone so it works out great.

I love how we still see past couples and get peeks into future couples. I cannot wait for Ace’s story. Rocha has teased us for three books and I’m ready for Beyond Jealousy, which is the next full length novel in the series.

Lucy Malone does a stellar job with the narration. Her voice is sexy for the love scenes and gritty enough to pull off the male voices. She puts the characters’ emotions into her delivery.

My Rating:
Narration: B

Beyond Shame:
All Noelle Cunningham has ever wanted is a life beyond–beyond the walls of Eden, where only the righteous are allowed to remain, and beyond her stiflingly restrictive existence as a councilman’s daughter. But only ruins lie outside the City, remnants of a society destroyed by solar storms decades earlier.

The sectors surrounding Eden house the corrupt, the criminal–men like Jasper McCray, bootlegger and cage fighter. Jas clawed his way up from nothing to stand at the right hand of Sector Four’s ruthless leader, and he’ll defend the O’Kane gang with his life. But no fight ever prepared him for the exiled City girl who falls at his feet.

Her innocence is undeniable, but so is their intense sexual attraction, and soon they’re crossing every boundary Noelle barely knew she had. But if she wants to belong to Jas, first she’ll have to open herself to the gang, to a dangerous world of sex, lust and violence. A world where passion is power, and freedom is found in submission.

Beyond Control:
She refuses to be owned.

Alexa Parrino escaped a life of servitude and survived danger on the streets to become one of the most trusted, influential people in Sector Four, where the O’Kanes rule with a hedonistic but iron fist. Lex has been at the top for years, and there’s almost nothing she wouldn’t do for the gang…and for its leader. Lie, steal, kill—but she bows to no one, not even Dallas O’Kane.

He’ll settle for nothing less.

Dallas fought long and hard to carve a slice of order out of the chaos of the sectors. Dangers both large and small threaten his people, but it’s nothing he can’t handle. His liquor business is flourishing, and new opportunities fuel his ambition. Lex could help him expand his empire, something he wants almost as much as he wants her. And no one says no to the king of Sector Four.

Falling into bed is easy, but their sexual games are anything but casual. Attraction quickly turns to obsession, and their careful dance of heady dominance and sweet submission uncovers a need so deep, so strong, it could crush them both.

Beyond Pain:
A woman with no future…

Live fast, die young–anything else is a fantasy for Six. She’s endured the worst the sectors had to throw at her, but falling in with Dallas O’Kane’s Sector Four gang lands her in a whole new world of danger. They’re completely open about everything, including their sexuality–but she hasn’t survived this long by making herself vulnerable. Especially not to men as dominant as Brendan Donnelly.

A man without a past…

In Bren’s arms, Six is finally free to let go. But his obsession with the man who made him a monster could destroy the fragile connection they’ve forged, and cost him the one thing that makes him feel human–her love.