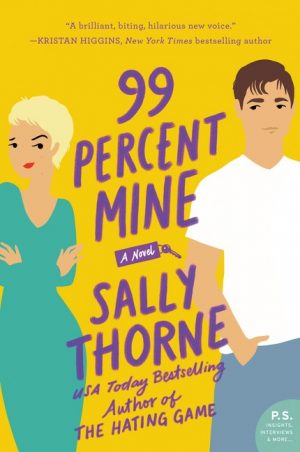 Sally Thorne is not one hit wonder!! Her second novel 99 Percent Mine is perfect (just like Tom!). Everything about Darcy and Tom’s story checked off all my boxes for a crush/second chance romance.

While reading 99 Percent Mine, I experienced every emotion Darcy felt. I was in love with Tom, sad when he wasn’t there, thrilled and turned on when he was, cried when Darcy wanted to cry. Watching friends try to work their relationship into the love they have felt since they were teens was an emotional rollercoaster.

Darcy and her twin brother Jamie have fought over Tom since he moved into the rental house across from their family home when they were all eight years old. Jamie claimed Tom as his best friend and Darcy claimed him as her Valeska.

“Tom Valeska has an animal inside him, and I’ve felt it every time he’s looked at me.”

Darcy makes many references to Tom being a growling animal that only she can see, while everyone else saw him as a sweet good boy growing up and a stand-up guy as an adult. He makes her feel safe and hunted at the same time.

99 Percent Mine is told through Darcy’s POV so there’s a time when she second guesses herself when it comes to how Tom sees her. She’s not 100 percent sure he is as into her as she is into him. After all, he has been dating and engaged to another woman for eight years. Megan has been the buffer Darcy needed to keep her feeling for Tom in check, but once she finds out there’s no longer a buffer all bets are off. She wants her Valeska.

Tom does his best to be professional while working on the Barrett twins’ grandmother’s house. Although Tom was like a third grandkid to Loretta, he still feels like an outsider. He’s been hired to renovate the old house and he feels the pressure to make it perfect because of Darcy and Jamie and to prove he can run his own construction company.

99 Percent Mine is full of sibling healing and changes with the trio of friends. Sally Throne delivers the story with humor, sexiness and plenty of heart.

After loving both 99 Percent Mine and The Hating Game, Sally Throne is firmly on my auto-read author list. I don’t know what she is working on next but I NEED IT NOW!

Crush: a strong and often short-lived infatuation, particularly for someone beyond your reach…

Darcy Barrett has undertaken a global survey of men. She’s travelled the world, and can categorically say that no one measures up to Tom Valeska, whose only flaw is that Darcy’s twin brother Jamie saw him first and claimed him forever as his best friend. Despite Darcy’s best efforts, Tom’s off limits and loyal to her brother, 99%. That’s the problem with finding her dream man at age eight and peaking in her photography career at age twenty—ever since, she’s had to learn to settle for good enough.

When Darcy and Jamie inherit a tumble-down cottage from their grandmother, they’re left with strict instructions to bring it back to its former glory and sell the property. Darcy plans to be in an aisle seat halfway across the ocean as soon as the renovations start, but before she can cut and run, she finds a familiar face on her porch: house-flipper extraordinaire Tom’s arrived, he’s bearing power tools, and he’s single for the first time in almost a decade.

Suddenly Darcy’s considering sticking around to make sure her twin doesn’t ruin the cottage’s inherent magic with his penchant for grey and chrome. She’s definitely not staying because of her new business partner’s tight t-shirts, or that perfect face that’s inspiring her to pick up her camera again. Soon sparks are flying—and it’s not the faulty wiring. It turns out one percent of Tom’s heart might not be enough for Darcy anymore. This time around, she’s switching things up. She’s going to make Tom Valeska 99 percent hers.