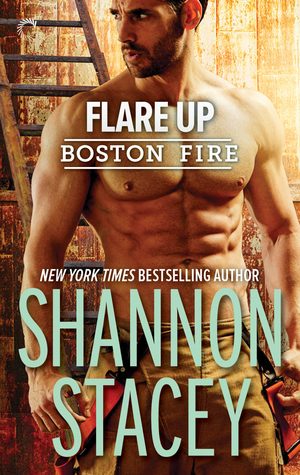 Shannon Stacey is always one of my go-to authors for small-town, family-centric, feel-good romances. Her Boston Fire series, although set in a bigger city, has the neighborhood feel and continues to fit the bill with its tight-knit firefighting family. We have met primary couple of Flare Up in previous books, when Grant was dating Wren. He was ready to propose when she broke up without explanation and disappeared.

Flare Up opens five months later, with a big fire at a rundown, unsafe apartment complex. Grant goes in to save a sleeping resident and is shocked to find Wren. It’s a great opening to the story, and what I appreciate most is that the gang immediately pieces together that she’s running from something, rather than have them act indignant or harsh to Wren.

As the book progresses, we watch Wren reconnect with the gang and slowly open up to Grant. Rather than Grant blow off her explanations or easily accept how he was treated, I like that he admits to her that he wants to understand how this situation grew to the point she felt she needed to run from Grant, rather than confide in him – but that he’s having trouble with it. It’s the little character developments like this one that make what could have been an average story, top-notch.

The romance is sweet and a bit slow because Grant wants to start over and take it easy, making sure they do it right this second time. Yet the pair realizes they can’t just start over with so much history. They give into their desires, but also spend time connecting and communicating.

Flare Up is another solid and entertaining story from Ms. Stacey. I liked the opening for this one a lot – especially because we knew about Wren breaking Grant’s heart from earlier books. The story flowed smoothly, and I enjoyed seeing them work on their relationship. I did have one small issue with respect to Grant and him keeping a secret from Wren, but the epilogue was fun, and I wonder if this is the final book in the series.

Nursing a broken heart while everybody around him seems to be drowning in happiness has Grant Cutter wondering whether staying with Engine 59—or even Boston Fire—is in his future. It’s tempting as hell to pack up what fits in his Jeep and hit the road. But then a 911 call brings the woman who shattered his heart back into his life, and he knows he won’t ever be able to fully leave her in his rearview mirror.

For a few months, Wren Everett had thought the nightmare of her past was behind her and she might live happily ever after with Grant. Until she got the phone call letting her know the time her ex had spent in jail for assault hadn’t cooled his temper or determination that she belonged with him. Cutting ties with Grant was the hardest thing she’d ever had to do, but it was also the only way to keep him safe.

Now that Grant is back, he’s not letting Wren push him away again. And even with the trust issues between them, Wren dares to hope she and Grant might have a future together after all…if they’re willing to fight for it.