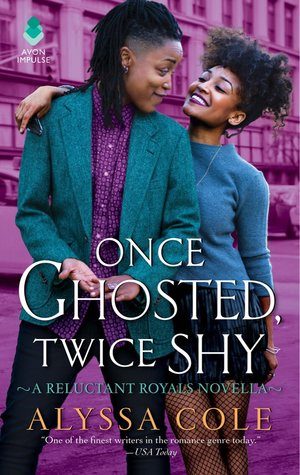 After thoroughly enjoying the first two titles in Ms. Cole’s Reluctant Royals series, I was pumped to see that Prince Thabiso’s awesome mega assistant extraordinaire, Likotsi, was going to get her own story! Although Once Ghosted, Twice Shy is definitely a standalone story, Likotsi is heavily featured in the first book, A Princess in Theory, and reading that story will provide background and character development that is limited in this novella.

The story takes place about 8 months after we first met Likotsi in A Princess in Theory. She’s had her heart broken after meeting someone when she was in NYC back those months ago. Trying to purge Fabiola out of her system, Likotsi begins her day off with a bucket list of must see things. Early on she runs into her ex, who persuades Likotski to spend some time with her. The story switches between present day in Likotsi’s POV to the past (8 months prior) when the pair first meets. The flashbacks are from Fab’s POV.

While it was a whirlwind romance and love-at-first-sight the first time around, Fab dumped Likotsi via text and refused to return her messages. From the flashbacks, we learn the truth of what really happened. Meanwhile in the present we learn of Likotsi’s ache and how she can’t give up on potential love and happiness.

I liked the story, but it didn’t WOW me like the first two books in the series did. Maybe because it’s a shorter story, and there isn’t much room for detailed character development. I actually didn’t mind the nearly insta-love, but it does take away from any getting-to-know the pair as a couple. I went in already liking Likotsi, but I felt I never really got to know Fab… Her actions speak to the type of person she is, which I like, but she’s still someone I admire from afar rather than know up close and root for.

In the end, I enjoyed the story and I’m glad Likotsi found love, I just wish I’d gotten to know Fabiola a bit more.

While her boss the prince was busy wooing his betrothed, Likotsi had her own love affair after swiping right on a dating app. But her romance had ended in heartbreak, and now, back in NYC again, she’s determined to rediscover her joy—so of course she runs into the woman who broke her heart.

When Likotsi and Fabiola meet again on a stalled subway train months later, Fab asks for just one cup of tea. Likotsi, hoping to know why she was unceremoniously dumped, agrees. Tea and food soon leads to them exploring the city together, and their past, with Fab slowly revealing why she let Likotsi go, and both of them wondering if they can turn this second chance into a happily ever after.