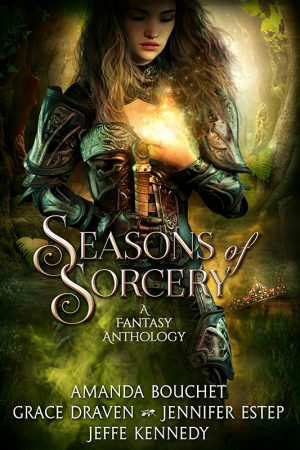 Winter’s Web:
At a local Renaissance Faire, Gin sees danger. Only this time, she isn’t the target. But her fixation with Hugh and the Circle leads her to make mistakes. I like that we see Gin flustered, not looking at all the clues, not getting the bigger picture.

The novella is an entertaining short with all the usual bells and whistles of the full length stories in the series. The story is shared from Gin’s POV and it feels like a mini version of one of her tales. The story can be read as a stand-alone introduction to Elemental Assassin series. I like the one and done adventure. My rating: B

A Wilderness of Glass:
Brida is a widow. One day while harvesting seaweed with the villagers, Brida discovers and saves a merman and child. The friendship that forms between Brian and the merman feels like the reverse of a happy Little Mermaid story. As they get to know one another, she feels an attraction. They become lovers.

An engrossing and odd tale of a widow who falls for the merman. But it’s not one-sided. Yet there is no magical happy ending for the pair, yet a sense of fulfillment. They have to live with their differences and be together as physics allow. Interesting, but I do wish for a slightly happier ending. My rating: B

A Curse for Spring:
Young Prince Daric of Leathen feels responsible for the drought that has plagued his land for the 10 years he’s been alive. When making his prayers to their goddess Braylian at the Cauldron, he is brave and seeks direct contact, but instead of Braylian, he finds her daughter, Spring, who is torn from the Cauldron and made flesh. Many years later, Spring (now called Rain) and Daric set out on a quest to save their kingdom before they are torn apart forever.

The pair shares an unrequited love that is finally explored as the pair journey to break the curse and feel their time is ending. I enjoyed the mythology and found the slow burn romance innocent and sweet. It reminded me a lot of Wesley and Buttercup (The Princess Bride). There is an HEA and solid story. I don’t feel I was shortchanged anything with the novella-length story. My rating: B+

The Dragons of Summer:
The Dasnarians are on the move and the seat of the Thirteen Kingdoms is preparing for an unknown attack. Harlen and Ursula are dealing with personal issues that need to be put to rest so they can focus on the coming war.

This story takes place after the conclusion of the previous full length book from the Uncharted Realms series. Shared from Harlan’s POV, the novella is different from the full-length stories, which are always shared from the female’s POV. It’s first person so once in a while, I think Ursula is sharing the story, before I remember it’s Harlan.

Honestly, I didn’t realize there were issues with Harlan and Ursula until the story was told. While they did get their HEA in their original story (The Talon of the Hawk), this is a necessary stop along the way while living their forever love. I love the hard emotions Harlan experiences and enjoyed how the author put a major issue between the pair to rest.

Overall it is an entertaining novella, but I think if you don’t read the series you won’t get much out of it – there is a lot of history shared in the previous books. My rating: B

SUMMARY:
Overall, the Season of Sorcery Anthology is a solidly entertaining and enjoyable book. Three of the stories are fantasy “romance” tales, with Ms. Estep’s book being an urban fantasy tale. I feel it is definitely enjoyable for those who haven’t read any of the series these stories come from, but I do think it helps.

An assassin at a renaissance faire. What could possibly go wrong? Everything, if you’re Gin Blanco. This Spider is trapped in someone else’s icy web—and it seems like they don’t want her to leave the faire alive . . .

A CURSE FOR SPRING BY AMANDA BOUCHET (Standalone)

A malevolent spell strangles the kingdom of Leathen in catastrophic drought. Prince Daric must break the curse before his people starve. A once-mighty goddess trapped in a human body might be the key—but saving his kingdom could mean losing all that he loves.

THE DRAGONS OF SUMMER BY JEFFE KENNEDY (The Uncharted Realms #4.5 / The Twelve Kingdoms #7.5)

As unofficial consort to the High Queen, former mercenary Harlan Konyngrr faces a challenge worse than looming war and fearsome dragons. His long-held secrets threaten what he loves most—and he must make a choice between vows to two women.

The stretch of sea known as The Gray rules the lives of those in the village of Ancilar, including widow Brida Gazi. In the aftermath of an autumn storm, Brida discovers one of the sea’s secrets cast onto the shore—a discovery that will change her world, mend her soul, and put her in the greatest danger she’s ever faced.