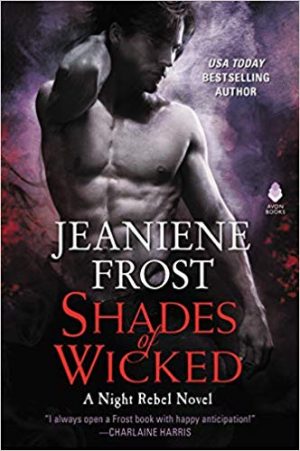 Y’all Shades of Wicked, OMG this book is so good.

Ian fans have been begging for his book since he graced the pages of One Foot in the Grave, the second book in the Night Huntress series. I’ve been on the fence about Ian getting his own book. Let me explain,  you know when you watch a trailer for a comedy movie and it’s hilarious, but then you see the movie and you realize all the good stuff was in the trailer; I’ve been a little worried all the good Ian stuff was in all his scene stealing moments in everyone else’s books. I was worried for nothing; Frost delivered because Ian‘s book is just everything.

Ian is the bad boy of the Night Huntress world, he’s the man whore. Shades of Wicked starts out with him in a bordello with a scene playing out in front of him that sounds like something from the Greatest Showman if it had been an adult film. Frost had me laughing so hard one moment, melting and swinging for Ian but not in the kinky way. Ian has layers and we’ve only seen a couple in this book. I can’t wait to see more about what’s underneath Ian fun loving persona.

We get cameos from major headers in the Night Huntress series like Cat, Bones, Mencheres, Vlad, and even Spade. There are some references to plotlines in previous books, so if you haven’t read any of the other books in the main series or the spinoff series, you will be spoiled. Veritas, the heroine of Shades of Wicked has also been in a few scenes of other books in the Night Huntress world, but not to the extent as Ian. Another reason to read ALL the books.

Seriously, Ian is a fixture in all of the other main characters’ lives whether he just popped in for a scene here and there or where he had some major page time in their stories. You are not going to get the full momentum of what Ian is and how he is developing as a character if you don’t read the rest of Frost books. I implore you take a look at the reading order list on Jeaniene Frost’s website (at the every bottom). To get the most out of character and over all world plot line development you should read the books in order as she has them listed.

Ok, I’ll get off my soapbox about you reading the others (but do it!!)

Shades of Wicked is an excellent start the Night Rebel series. Like I said we get to see more about Ian than just his fun loving side and Veritas is a character with depth too. I really liked her and want to know more. We get a lot of her secrets, but I think there is more to learn about this strong heroine. The two are made for each, opposites attract but with surprising similarities. They both need hugs!

I NEED Wicked Bite, the second book releasing July 30th, now!!!  (Do not read the summary for Wicked Bite until you’ve read Shades of Wicked. There are some spoilery types things.)

Master vampire Ian is unrepentant, shameless…and every shade of wicked. He’s made one too many enemies in his two centuries of existence, including Dagon, a demon who now lays claim to his soul. Ian’s only chance to escape Dagon is to join forces with a Law Guardian, but he’s never been able to abide by the rules for long.

Veritas’ normal role is police, judge and jury to reprobates like Ian. But she has her own ax to grind with Dagon, so if she can use Ian as bait…well, all’s fair in law and war. As they scour supernatural hotspots to perfect their trap, Veritas soon realizes Ian’s devil-may-care, roguish image hides something much more powerful. And Ian discovers that Veritas has shocking secrets of her own. As they’re drawn to each other with a passion as intense as their peril, either love or justice will prevail. But each will have devastating consequences…