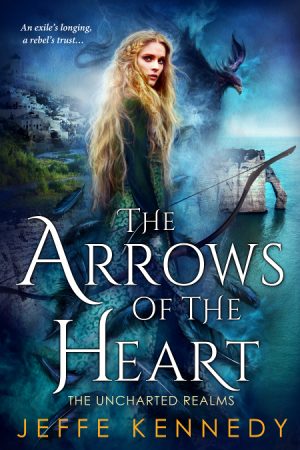 The Arrows of the Heart
Author: Jeffe Kennedy
Reviewer: Jen
Rating: B+

We return once again to the magical world of the Tala and the surrounding Twelve Kingdoms. The Arrows of the Heart picks up the story of Karyn af Hardie, the Dasnarian ex-wife of Kral who gave up her comfortable life and high standing by leaving her home in hopes of finding real love (see The Edge of the Blade). The story overlaps in time with The Shift of the Tide.

I enjoyed Karyn and Zyr’s story quite a bit. I appreciate that it takes time for each to let go of past assumptions and realize love is so much more than they ever imagined. Sent on an important mission, the pair is forced to spend one-on-one time together, and when misfortune plagues the pair, each reevaluates what is truly important. Coming from two completely different cultures with opposing expectations, the pair learns to overcome their differences and find common ground. While the story is only shared from Karyn’s POV, the author does a great job conveying Zyr’s feelings through his actions and words.

In addition to the beautiful romance between Karyn and Zyr, The Arrows of the Heart progresses the plotline of the impending war between the Tala/Twelve Kingdoms and the Deyrr/Dasnairans. In fact, it’s the first time in a couple books I felt like the overall story moved significantly forward. The book ties up some outstanding issues from previous books and appears to be bringing all the parts together in anticipation of the looming war.

Overall, I found The Arrows of the Heart to be a highly entertaining fantasy romance, and I look forward to finding out what is next for the Twelve Kingdoms and their allies.

As the Twelve Kingdoms and their allies are drawn toward war, a princess cast aside must discover a purpose she never dreamed of…

Karyn af Hardie behaved like a proper Dasnarian wife. She acquiesced, she accepted, she submitted. Until her husband gave her a choice: their loveless, unconsummated royal marriage—or her freedom. Karyn chose freedom. But with nowhere to run except into the arms of Dasnaria’s enemies, she wonders if she’s made a mistake. She wants love, security, a family. She can’t imagine finding any of it among the mercurial Tala.

Worst of all is Zyr. The uninhibited shapeshifter is everywhere she looks. He’s magnetic, relentless, teasing and tempting as if she’s free to take her pleasure where she wishes. As if there isn’t a war rising before them, against a vile and demanding force far stronger than they. But with Karyn’s loyalty far from certain, Zyr offers her only chance to aid the defense—a dangerous gambit to seek out a land not seen in centuries, using clues no one can decipher. Together, they’ll have every opportunity to fail—and one chance to steal something truly precious…