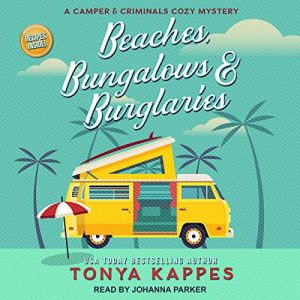 Mae West’s life just took a turn for the worse: her husband was arrested for running a Ponzie scheme, and Mae is left with nothing but a barely-drivable RV and the deed to a trailer park in Normal, KY. Expecting a resort but finding a dump, Mae quickly fits in with a few of the town’s denizens who were also swindled by her ex, Paul, although it takes a bit to win them all over. Determined to help right some wrongs, Mae works with the town to fix up the park; however, after being there for less than 24 hours, Paul turns up dead, floating in the lake, and she’s the top suspect.

Beaches, Bungalows & Burglaries is an entertaining mystery nestled in a cozy small town, filled with an array of likable characters. Coming in at just under 5.5 hours, the story is on the short side and moves quickly. There is a good mix of world building and character development along side the murder plot line. The mystery itself is interesting while tossing in a couple twists that kept me guessing.

The story is shared in the first person POV of Mae, so we witness first-hand her progression from shocked Manhattan divorcée to capable trailer park owner. While I was sympathetic to Mae from the start, it took me a bit to warm up to her. In her dual efforts to help the town citizens while also trying to figure out who killed Paul, she acts a bit two-faced. But after some time, she learns to trust, and open up with her new friends.

Narration: Even though I just listened to Johanna Parker read an SPI Files story, I found that for Beaches, Bungalows & Burglaries she uses a narrator voice that isn’t quite the same, which I appreciate immensely. The main characters in the two series have very different personalities, so different voices make sense. And I feel that Mae’s narrative voice fits her personality: cautious yet courageous, and a little bit clueless. Mae lived in Kentucky until she was 18, and she notices a return of her accent upon her return to the south. Overall, Ms. Parker fits the southern, small-town feel and pacing of the narrative. Each character has a slightly different voice fitting his/her age and gender. Her male and older women characters have deeper voices.

In the end, I enjoyed my first Tonya Kappes mystery and look forward to seeing Mae mature and grow while discovering what other trouble she will find in Normal.

Mae West, a far cry from the Hollywood actress, has been thrown for a loop. Her plush lifestyle in the big city of New York comes to a screeching halt after the FBI raids her mansion and arrests her husband, Paul West, for a Ponzi scheme that rips people out of millions of dollars.

Mae finds herself homeless, friendless, and penniless. All hope isn’t lost. . .the only thing Mae got to keep that the government didn’t seize is a tourist camp ground, Happy Trails, in Normal, Kentucky and an RV to live in. One problem, Mae’s idea of camping has room service.

By the look of the brochure, Happy Trails has plush Kentucky Bluegrass, a crystal clear lake, a beach chair with her name on it and thoughts of how much money it could bring her after she sells it. Mae figures she’ll take a couple weeks vacation with her toes dipped in the lake. Things aren’t always as they appear. The Kentucky Bluegrass is nothing but dirt and the crystal clue lake is murky with green slime on top.

Mae quickly find out that Happy Trails and the citizens of Normal were also victims of Paul’s schemes, making her lower than tha lake scum in the residents’ eyes. Mae doesn’t think things could get much worse, but as luck would have it, Paul West has escaped from prison and is found dead, murdered, floating in the Happy Trails mucky green lake.

Mae is the number one suspect on Detective Hank Sharp’s short list. After all, Mae has the perfect motive as a kept wife who has been scorned to ashes, embarrassed to death, and seeking revenge.

Time is running out for Mae to prove that she’s innocent and nothing like her husband. If only she could get someone to believe her and talk Detective Sharp into looking at other residents who’ve lost all their savings to Paul’s Ponzie scheme before the curtain is closed on this Hollywood namesake.