Audiobook review: Love and Other Words 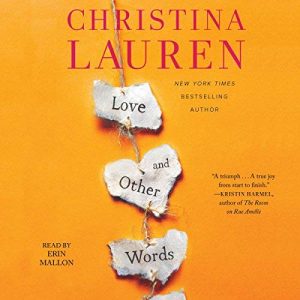 I am a huge fan of the writing team of Christina Lauren. I have read or listened to all their titles save two (but they are on my TBR). Love and Other Words is marked as Women’s Fiction (I really hate that term, but I won’t go off a rat in the middle of my review). I would say it’s half young adult and new adult romance. Did I confuse you? Let me explain. The novel does not have chapter numbers but is set up by Then and Now. The Then “chapters” are set during Macey and Elliott’s teenage years where they met, become best friends and then later fall in love. The Now “chapters” are set in the present day about 11 years after they lost touch with each other. So the Then reads like a coming of age YA romance while Now reads like a second chance New Adult romance. The back and forth between past and present while the story unfolds reminded me of the NBC TV show, This is Us.

Love and Other Words is a heartfelt story about a young girl, Macey living with her dad after they lost her mother. The mother made out a list of guidelines for the dad to help him to raise Macey. One of the things the mom listed was finding a place where Macey can unwind when school or life when life gets to be too much. So the dad buys a weekend/summer house a few towns over from their home in Berkley, CA. That’s where Macey meets Elliott. His family lives next door and the two become fast friends over their shared love of reading.

Macey and her dad become extended members of Elliott’s family. You can feel the love with every exchange between the characters and the scene at Elliott’s house on Thanksgiving was touching and brought a tear to my eye.

Love and Other Words gutted me, in a good way. It’s great to have a good ugly cry from time to time. If you are looking for a standalone novel about two people finding love early, losing it and reconnecting years later to finally have a happily ever after, grab a copy and I highly recommend experiencing this story on audio.

Love and Other Words is my second audiobook narrated by Erin Mallon. Christina Lauren wrote an emotional story and Erin brought ALL the emotions into her performance. She does an amazing job switching from female to male characters. I felt like Macey and Elliott were narrated by two different narrators. In my opinion, it is hard to find a narrator who can easily do the opposite sex without sounding forced. Erin Mallon has made it to my list of favorite narrators and I look for to listening to her deliver another stellar performance.

Macy Sorensen is settling into an ambitious if emotionally tepid routine: work hard as a new pediatrics resident, plan her wedding to an older, financially secure man, keep her head down and heart tucked away.

But when she runs into Elliot Petropoulos—the first and only love of her life—the careful bubble she’s constructed begins to dissolve. Once upon a time, Elliot was Macy’s entire world—growing from her gangly teen friend into the man who coaxed her heart open again after the loss of her mother…only to break it on the very night he declared his love for her.

Told in alternating timelines between Then and Now, teenage Elliot and Macy grow from friends to much more—spending weekends and lazy summers together in a house outside of San Francisco reading books, sharing favorite words, and talking through their growing pains and triumphs. As adults, they have become strangers to one another until their chance reunion. Although their memories are obscured by the agony of what happened that night so many years ago, Elliot will come to understand the truth behind Macy’s decade-long silence, and will have to overcome the past and himself to revive her faith in the possibility of an all-consuming love.