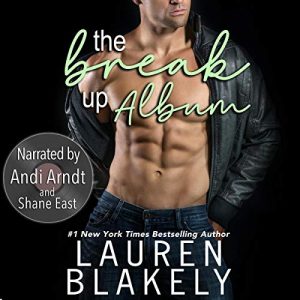 The Break-Up Album is about Jane Black, a rockstar who was left by her husband because he finally comes to grip with being gay. This devastates Jane because she is totally in love with him and they have a kid together. With hindsight, she realizes she missed clues over the few years they were together including their one-night stand that had that left her pregnant.

Jane hasn’t been with a guy since her husband left her about a year ago. She hasn’t even been attracted to anyone, well that’s not true. She’s been attracted to Matthew from the first time she saw him, but at that first meeting she was still married and he had a girlfriend. Neither are true now and that attraction hasn’t faded. When Jane finds out Matthews also likes her and wants to interview her the two try to find their chemistry. Of course like other romances, the fight doesn’t last long.

Matthew is exactly what Jane needs. He gets her to open up and fall in love again. There are a few rocky steps to their HEA because of Jane’s past making it hard for her to trust again.

The Break-Up Album is narrated by Andi Arndt (Jane’s POV) and Shane East (Matthew’s POV) with Andi doing the majority of the narration because the story is told mostly through Jane’s POV. There are a few times within the same chapter both narrators voice the back and forth worth dialogue. Their voices work well together and they do a good job of bringing Jane and Matthew’s story to life.

While The Break-Up Album is not on the top of my favorite novels by Lauren Blakely it was still an enjoyable listen.

They say all’s fair in love and music…

I say life would be a lot fairer if I wasn’t so wildly attracted to the man I’m spending all my days with, who’s decidedly off-limits.

But then again, I can’t technically complain—I have a Grammy, a hit album, and a job most people would be envious of—I’m a rock star. What I haven’t had in years is a hot date. The dating drought isn’t because I’m a single mom. It’s because I have a little itty-bitty issue with trust because of how my marriage imploded.

Matthew is determined to break down my walls, and it sure doesn’t hurt that he’s British, witty, and far too tempting. He’s also the toughest music journalist out there, and he’s interviewing me for an in-depth article. The trouble is, I want to get in-depth with him, and the more time we spend together, the more tempted we both are to cross lines that shouldn’t be crossed.

Previously released as Far Too Tempting (October 2013), now updated for a new readership!