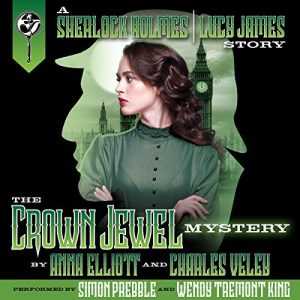 When I put a call out for historical mysteries with strong-willed lead women, I got some great suggestions. It was narrator Wendy Tremont King who told me about her work on the Sherlock Holmes and Lucy James Mysteries and sent me the prequel for review. Technically, The Crown Jewel Mystery is the fourth book in the series, but it is most certainly a prequel and may be enjoyed without previous knowledge of the series. However, I will share that while the brief book description implies Sherlock and Lucy meet in this book, they do not, and that was a bit of a disappointment for me.

Ms. James is an American actress in London, searching for clues to her unknown ancestry. She and her best pal Johnny Rockefeller (yes, that Rockefeller!) have a lead to a bank account that has been anonymously paying for her boarding school in America. While at the bank, a group of ruffians enter the facility and hold the customers hostage while attempting to break into the vault. Quick on her feet and smarter than almost everyone, Lucy attempts to negotiate with the robbers and save the group.

This novella-length story is mostly told from Lucy’s POV, however we also are privy to the thoughts of Mr. Watson, who along with Sherlock, is outside the bank assisting the police. I like how we get the two sides of the story from completely different perspectives. While Lucy’s primary focus is discovering clues to her heritage and saving those in the bank, Watson is most concerned with solving the crime and keeping Holmes’ identity a secret, for his death was outlined in his last Sherlock memoir, The Final Problem.

Overall, I enjoyed the story. It’s short and fast-paced; always moving the story forward. I enjoyed the mix of Lucy’s POV and Watson’s notes sprinkled in. The mystery itself isn’t complex nor overly captivating but listening to Lucy gain confidence to deal with the bank robbers was exciting. The story is set in the late 1800’s but could have just as easily been set in more modern times.

Narration: The narration is fitting for POVs, with Mr. Prebble representing Watson’s POV and Ms. Tremont King sharing Lucy’s POV. While 1.25x was the perfect speed for Watson, I had to up the speed to 1.5x for Lucy’s POV. I felt the two speeds didn’t mesh as well as I would prefer. Mr. Prebble has a mature British-accented voice which fits my image of Watson. His sections are fairly brief, so I would like to hear more to see how it translates with female and non-British characters. Ms. Tremont King’s younger American female voice is perfect for Lucy, capturing her exuberance and vitality. Additionally, she has a solid range of accents for her various characters. She suitably alters her performance depending on the character.

In the end, the series has caught my attention, and I will certainly try the first book in the to see what it is about.

Review copy provided by the narrator.

A young American actress arrives in London hoping to learn her identity, just as Sherlock Holmes is closing in on a master criminal. Their worlds collide, and not even Holmes could have foreseen the impact!

The prequel to The Sherlock Holmes and Lucy James Mystery series.