Audiobook review: The Hollow of Fear by Sherry Thomas 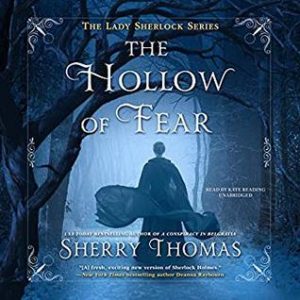 Note: This review contains spoilers from the previous titles in the series.

Dealing with the aftermath of the shocking discovery that Lady Ingram is a spy for Moriarty, The Hollow of Fear shifts location away from London and out into the country. The gossips think there is something suspicious about Lord Ingram and the disappearance of Lady Ingram, and their beliefs are confirmed when she turns up dead on Lord Ingram’s estate during a country party. With her sister Livia in attendance and her closest friend, Lord Ingram, the primary suspect, Charlotte disguises herself as Sherlock Holmes’s brother to help solve the case.

The Hollow of Fear is an utterly fantastic story, and my favorite of the series thus far. It is a solid mystery with twists upon twists. And so many things are revealed, with the entire playing field shaken and rearranged. The layers of the mystery are a bit more convoluted in this one – necessitating a set of short flashbacks to the near past, so that readers become privy to all the action and secrets that were redacted during the first telling. It was a bit confusing, but in the end, made for a better, more suspenseful story.

While the mystery is top notch, the interactions between the various characters, along with Charlotte’s own personal growth, make The Hollow of Fear an amazing story. Charlotte is growing – she’s understanding human nature more as she interacts with the outside world and spends time with Mrs. Watson. The give and take between Charlotte and best friend Ash is bittersweet. He loves her deeply and she loves him in her own way. They understand so much about one another, which is why they know that they cannot be together. Maybe someday they will be in a place to further explore their feelings. *sigh* I also love getting inside the head of Inspector Treadles, who is struggling to understand his place in a world where woman crave more than being a polite society matron.

Narration: The story is shared from multiple third-person POVs, both male and female; primarily Charlotte, Livia, Mrs. Watson, Inspector Treadles, and Lord Ingram. By now, this my third book in the series, the character voices and overall narrative are very familiar to me. I rather enjoy Ms. Reading’s performance. Her narrator has a fairly deep, feminine, accented voice. The dialogue is altered based on who is speaking – enough to identify that it is more than one person speaking, and most characters are assigned a specific voice. Ms. Reading’s male voices are fairly deep and genuine. The story is narrated with an English accent. At 1.5x, the narration at times is slightly faster than I may want, but not usually noticeable, and it is a comfortable speaking speed for me.

The Hollow of Fear solidified the Lady Sherlock series as an-auto-buy MUST read for me!

My Ratings:
Story: A
Narration: A-

Under the cover of “Sherlock Holmes, consulting detective,” Charlotte Holmes puts her extraordinary powers of deduction to good use. Aided by the capable Mrs. Watson, Charlotte draws those in need to her and makes it her business to know what other people don’t.

Moriarty’s shadow looms large. First, Charlotte’s half brother disappears. Then, Lady Ingram, the estranged wife of Charlotte’s close friend Lord Ingram, turns up dead on his estate. And all signs point to Lord Ingram as the murderer.

With Scotland Yard closing in, Charlotte goes under disguise to seek out the truth. But uncovering the truth could mean getting too close to Lord Ingram—and a number of malevolent forces…