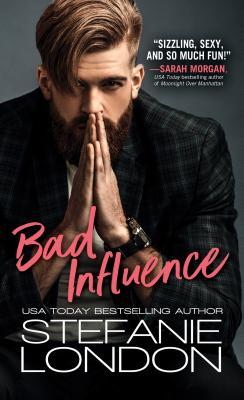 Annie…Annie…Annie…  Annie Maxwell is the name everyone wants to know.  She is the architect of the Bad Bachelor app.  Whole online forums have been dedicated to villifiying her and the monster she created.  She is a wanted woman and has the emails to prove it.  Still, she stands by her creation—even to the detriment of her close friendship with ballerina Remi Drysdale (Bad Reputation). At least her other BFF Darcy Greer (Bad Bachelors) is still speaking to her.

Having taken up running to cope with her mother’s breast cancer treatment three years ago, Annie’s helping Darcy to train for a little 5K with her high profile fiance.  Just as they begin the first jog on the first morning—BAM! Annie literally runs into Joseph Preston, her ex, and the impetus behind the creation of Bad Bachelors. He’s back from Singapore and now he’s soaking wet in his four-figure tailored suit after landing in a fountain in Central Park.

Even though this is the first time we’ve met Joseph Preston, we’ve had two books in the Bad Bachelors Series to hate this man. It’s very satisfying as Annie gives no purchase to Joseph after this encounter.  I would have thought less of both Annie and author Stefanie London if she had.  So where do we go from here?  It’s clear that Annie is strong enough to never see Joseph again if that’s what she really wanted.  Unfortunately, one of her haters has made it through all her defenses and is now threatening her.  She needs an expert in IT security, one who can keep her anonymity, one who wants what’s best for her.  Joseph is really the only man for the job.

What follows is a relationship of necessity while approprite apologies are made for the choices made three years ago when Joseph chose his career over Annie, and Annie chose herself over Joseph.  No one is faultless in this break-up.  We’ve had cause to dislike Annie as well in the first two books which makes it a little easier to forgive Joseph and allow them to work it out.  The length of the book didn’t allow for it, but it’s unfortunate we didn’t get to know Annie before the advent of the Bad Bachelors app and how Joseph’s departure changed her.  In a nice twist, and in departure from the first two books, the title, Bad Influence, references Annie, not bachelor Joseph, when he accuses her of being a bad influence on him. The reader is put in the position of forgiving both of them and I’m not entirely sure I liked her enough, at least before the peak crisis, to do so.  It’s to London’s credit that I was emotionally conflicted.

I have to give additional credit to London for once again including the mothers in this story as both good and bad. That is a difficult line to walk since we like to pigeonhole characters, especially mothers, in fiction.  Annie notes, “There wasn’t a bad feeling the world that couldn’t be soothed by a warm, maternal embrace.“ Joseph’s mother, not warm or maternal, does play a positive role in the resolution of the story.

The ending puts a very tidy bow on the story and the trilogy.  The reader is left feeling complete.  Overall, I enjoyed the read and finished it in a single day.  I think it went quickly because it was the last book and we didn’t need a lot of retelling of the earlier books to set it up. If you’ve read the first two, don’t hesitate to pre-order this one.  If you haven’t, you get to read the trilogy complete without having to wait to see what happens.  Get started!

Annie Maxwell had her whole life figured out…until her fiancé left her when his career took off. If that wasn’t bad enough, every society blog posted pictures of him escorting a woman wearing her engagement ring. To help the women of New York avoid guys like her ex, Annie created the Bad Bachelors app. But try as she might, Annie just can’t forget him…

For bank executive Joe Preston, his greatest mistake was leaving the love of his life when she needed him most. Now, all he wants is to make things right—and she won’t have him. But when Annie’s safety is threatened by a hacker determined to bring down her app, Joe is the only one she can turn to. He’ll have to lay himself on the line to prove to Annie that he’s a changed man. But will their hard-won bond survive the revelation that Annie is the one pulling the strings behind Bad Bachelors?