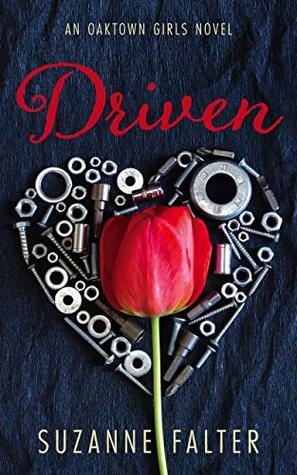 When I was initially asked about reviewing Driven, I was immediately drawn in by its premise: a well-established, “Woman-Owned, Woman-Powered” auto repair shop fighting for its survival against a vicious new competitor that will stop at nothing to destroy them. Add in some promised romance and self-discovery, and I was absolutely on board. In many ways, this story lived up to my expectations very well. In others, however, I believe it could be a good deal better.

In addition to the cover (which I kind of love), there was quite a bit to like about Driven. Tenika and Lizzy, the co-owners of Driven, are fiercely loyal, resilient, multi-faceted women whose friendship truly did seem unshakeable. And, although Kate had her strengths, as well, it was the bond between the former two characters that kept me engaged the most. Another thing that I particularly enjoyed was the relief and joy they both felt when their situation began to improve. This relationship was easily one of the most solid aspects of Driven, providing the necessary foundation for the rest of the narrative to build on.

Kate, on the other hand, left me feeling conflicted. Trapped in a seemingly impossible situation, she is coerced into acting against her own inherent goodness by her unconscionable boss, and ends up falling for one of her targets in the bargain. Even though hers is an unenviable position in just about every way, she never really won me over, my desire to be firmly in her corner being stifled by her ongoing inconsistency.

Ultimately, it was Kate’s internal seesawing that bothered me most about the story. Kate is definitively a “good person.” She hates the role she is compelled to play in Driven’s potential downfall. She is incapable of not helping Tenika and Lizzy in any way she can. Even though her employer’s mean streak far predates the head injury that is making it much worse, Kate feels bad for her. The problem isn’t even that she inadvertently got stuck in her own lie about her identity—it’s that she spends the majority of the novel constantly changing her mind about coming clean. That the same waffling overshadowed her nascent relationship with Lizzy also compounded the situation, and resulted in a significant challenge to my faith in the story.

The other problems I encountered were of a technical nature, but were significant enough that I was unable to ignore them. Typos, the accidental substitution of the wrong name for a main character, excessive repetitions, missed use of homonyms, and other editing detritus were present throughout the narrative, causing the situations within the story to feel more out of reach than they otherwise might have.

Overall, I believe Driven is a heartfelt, optimistic narrative about perseverance, acceptance, and love. Though I had some issues with various aspects of the story, there were certainly some bright spots, as well. As a new series, I think the Oaktown Girls novels have plenty of room to grow, and would welcome the opportunity to see where they might go in the future.

Who says you can’t find the love of your life while you’re getting your tire fixed?

Driven is the oldest woman-owned garage in Oakland – and the pride of the lesbian community.

At least, it is until the uber-competitive former race car driver Mindy Rose shows up and opens her own garage, complete with chair massages and a sushi bar.

Mindy’s out to destroy Driven, a fact that galls her good-hearted, and very ethical Irish assistant Kate.

This is just reinforced when Kate has an emergency blow out, and is forced to go into Driven for a repair. Instantly, she finds herself drawn to the tall, tantalizing co-owner Lizzy.

That’s when things get … well … complicated.

Can sweet Kate and passionate Lizzy finally find the love they’ve been looking for forever? Or will Mindy find out and bring them and Driven down?

It’s just the beginning of the fun, romantic free-for-all that is the Oaktown Girls series.