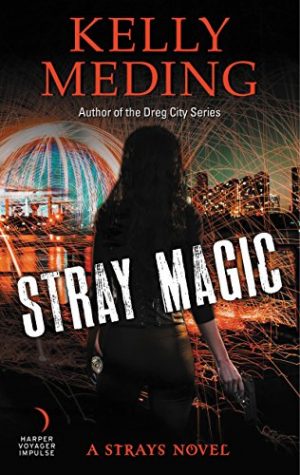 I’m a big fan of Kelly Meding’s writing and her as a person. I got to meet her at AAD a few years back and she was delightful.

She writes great urban fantasy stories with strong and likable heroines. I started my love affair with her writing with her Dreg City series a few years back. I knew I would like, if not love Stray Magic, and I’m kicking myself for waiting to finally read it.

After reading chapter 1 of Stray Magic I remembered there was a short story entitled Freak House set in the Stray world in the Carniepunk anthology which was published back in 2013 (great UF anthology, check it out!) so I went back and read Freak House before I went much further into Stray Magic. The short story is a great intro to the world building and a look at our main character, Shiloh. While you don’t need to read the short I encourage you to read it if you have access to it via your library or buy it, it along with most of the other stories in the anthology are available separately in ebook format.

The opening scene where Shiloh gets a call about a trailer park community being held hostage by vampires really set the tone of what kind of humor was going to be involved. Meding did a good job of mixing hammer sarcasm with just a touch of darkness in Stray Magic.

Stray Magic is set in the real world with mentions of real-world cities. Some paranormals are “out” to humans like vampires, werewolves, some fey, but there are many others who choose to stay hidden to humans after some outfall to the others being out. I liked how the paras who are out have been out since WWII (werewolves with vampires coming out a decade later).

Meding’s spin on some of the more infamous paranormals was refreshing where she mixed old mythology with some of her own twists.

Stray Magic focuses on the mystery of why large groups of vampires and werewolves who have been kidnapped. We follow the main character, Shiloh, and her group of coworkers/friends on the adrenaline-infused adventure to save them. At the heart of the case, there is a necromancer but Shiloh is not certain if the necromancer is the main bad guy or if he’s being used by someone else.

Meding help me get my urban fencing groove back on after reading so much romance. I now want to switch over and read nothing but urban fantasy. As I end this review I am opening up my Kindle and starting Stray Moon, the second book in the Stray series.

Shiloh Harrison was hoping for a few days off to recover from a particularly nasty assignment, preferably with the help of the talented hands (and, well, the rest of his body too) of her sexy boyfriend, Vincent. But when a group of vampires takes an entire trailer park hostage, there’s nothing to do but make her apologies and get to the scene.

Such is the life of a Federal Marshal in the Paranormal Investigators Unit.

Yet this isn’t like her typical track-and-nab case: something is going on that has vampires scared, and it takes all her strength not to imagine what could frighten such powerful creatures. Unfortunately, she doesn’t have that option. Her boss is MIA, someone is snatching vampires, and there’s a ticking clock that can only end one way: a bloodbath.

Unless she can stop it.