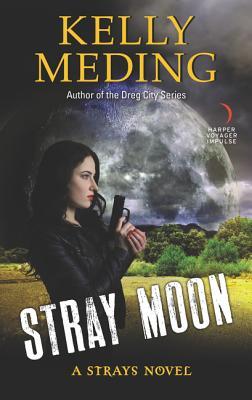 After loving the first book in the Strays series, Stray Magic, I jumped right into Stray Moon, I mean how could I not?! Stray Moon picks up within days of the events in Stray Magic. Shiloh and the gang are on a paid suspension from the Para-Marshals but that doesn’t stop them from investigating the missing werewolves from Stray Magic.

While the focus was on the vampires in Stray Magic, this time around the focus is all about the werewolves. Both groups have been targeted by the same big bad. We learn who that is in the last quarter of the book and it leaves Shiloh and her mother reeling from the familial connection.

Shiloh has to deal with the memory loss of someone in her life (I don’t want to name the character because it’s a spoiler for the first book). Because of some hidden powers, Shiloh is able to work around the memory loss with shared thoughts and the other character. It seems Shiloh’s half-djinn side is not the only part of her that gives her strength. Her magical genes from her mother’s side of the family are shaking things up with new emerging powers. I think Shiloh will only get more powerful and interesting as the series continues.

Stray Moon much like its predecessor, follows the small group of friends into a case where they save many lives and learn there is a bigger agenda when it comes to the humans vs paranormals. It looks like there might be a war coming and I can only hope that Tennyson, Master vampire, continues to want to do a “ride along” with Shiloh and the gang as they try to find the big bad who is still at large.

The hardest thing about reading Stray Magic and Stray Moon back to back is waiting for the next novel in the Strays series. I. Need. It. Now.

Para-Marshal Shiloh Harrison has always been a great number two for the East Coast unit. But after her boss is found dead (having betrayed the paranormals he was sworn to protect), she’s suddenly thrust into a leadership role she isn’t prepared for. And it doesn’t help that she traded away memories of one of her most important team members to save another’s life during her last mission.

Too, she’s in charge of a unit that is mired in bureaucratic red tape, meaning she’s essentially under house arrest. But a West Coast Para-Marshal has astral-projected a warning: werewolves are going missing, and she needs Shiloh’s help. Last time it was vampires. This time it’s werewolves. Half-djinn herself, she knows she can’t just sit around and do nothing while paranormals are getting snatched. Her old boss may have broken his oath, but Shiloh will do anything to serve and protect.

Reviews in the Series:
Stray Magic by Kelly Meding (Stray #1)