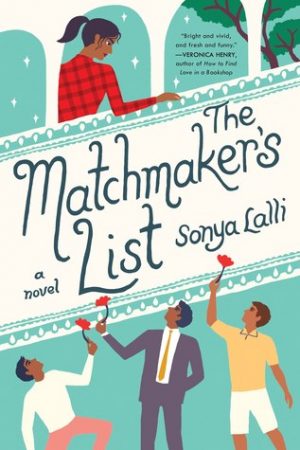 I’m just going to come out and say this – while I enjoyed parts of The Matchmaker’s List, I struggled with the review and how to rate the title. I went in expecting a romance and therefore a happily ever after story, but what I found was something different. Not bad, but not what I wanted. Some would say correctly that the ending of the book is an HFN (happily for now), but I would still argue that the book is not a romance because the focus of the book isn’t about finding love, but rather it is about a young woman finding her place in the world.

Raini, an Indian woman living in a well-established Indian community, was born and raised in Toronto, Canada. Her Indian roots are strong, but she’s a Western World gal. She made a promise to her Nani (who raised her) two years ago that if she isn’t married by age thirty, Nani could play matchmaker. And now that Raini turned twenty-nine, Nani has a list of single Indian men for her to start courting. When the pressure gets to be too much, Raini lets an assumption that she is gay go unchallenged, hoping it would stop the relentless matchmaking. Unfortunately, it just brings trouble and heartache to her and those around her.

Overall, The Matchmarker’s List was a quick read, although I found the abrupt change in write styles for flashbacks rather abrasive. Most of the book is told in past tense, third person narrative; however, when a flashback comes around, the story suddenly shifts to first person, present tense. That did not work for me. Other than those odd passages, I found myself engrossed in Raini’s life and discovering if she would find happiness. I enjoyed reading the personal interactions between characters and how each character reacted to and processed changes.

Raini is so worried about disappointing Nani that she will do most anything to keep up the facade Nani prefers to believe. She’s desperate to keep the peace after her mom bucked the traditions of her culture and was unwed and pregnant at 16. Nani’s hopes and dreams rest on Raini’s shoulders now, and the weight is crushing Raini. This causes Raini to make a series of bad decisions, all in the name of keeping the peace. But it wasn’t done in a comedic fashion. What could have been played up as silly in a rom-com, was more grounded and serious in The Matchmaker’s List. Rainin’s choices rippled out and created big waves for others around her. I could only handle so much until I was annoyed and irritated with Raini. Yet, I kept reading because I wanted her to succeed. I needed to know everything would be okay.

In the end, I’m not really certain how I feel about The Matchmaker’s List, and I struggled how to rate it. I felt oddly compelled to keep reading the book and was engrossed in the story when I was reading it. But a lot of what happened bothered me – like how deeply Raini buried herself in the lies she told, and how she wouldn’t even confide in her closest friends. I disliked her much of the story, yet I wanted to know she’d be okay. If I rated this as a romance, I would only give it a C- at best, the end of the book may be an HFN, but the story was not about the romance between two people. However as a story, not defined by a genre, I liked it a bit more, even though I had issues, and would give it a B-. No matter what rating I assign the story, a simple rating cannot express the full range of emotions that I feel about this book. So maybe give it a try and see what you think…

My Ratings:
B- Liked It, but I had a few small issues
C- Finished It – Liked a little, didn’t like a lot

Raina Anand may have finally given in to family pressure and agreed to let her grandmother play matchmaker, but that doesn’t mean she has to like it–or that she has to play by the rules. Nani always took Raina’s side when she tried to push past the traditional expectations of their tight-knit Indian-immigrant community, but now she’s ambushing Raina with a list of suitable bachelors. Is it too much to ask for a little space? Besides, what Nani doesn’t know won’t hurt her…

As Raina’s life spirals into a parade of Nani-approved bachelors and disastrous blind dates, she must find a way out of this modern-day arranged-marriage trap without shattering her beloved grandmother’s dreams.