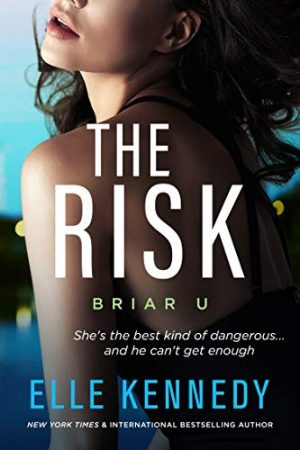 Phew!  *Slaps desk*  I did it again.  Done inside of twenty-four hours.  I tried not to, tried to stretch it out, but who are we kidding?  I was so looking forward to The Risk, book 2 in the Briar U Series, that when it dropped into my cue I literally squealed. Out loud. Like a school girl.

Author Elle Kennedy takes us back to Briar University and the world of D1 hockey, back to the drama, competition, and sexiness that is elite college athletes and their sports. The Risk picks up right where The Chase left off. In acknowledgement of Kennedy’s readers who are now six books in, there is very minimal recap and we’re right back in Hastings, Massachusetts.  Brenna Jensen and Jake Connolly spent a lot of The Chase dancing around each other.  In The Risk we get to see them finally engage.  The book is aptly titled as they each have significant things to risk to be together.  Just the set-up is hard—head coach’s daughter possibly dating the team captain of their biggest rival while the conference championship, where the two teams will face off against each other, hangs in front of them.  They don’t have the luxury of thinking only of themselves. Even the prospect of their relationship affects all the people they care about.

Brenna has spent the last two years in community college, bringing up her grades from the failure that was her high school years and getting her life back on track.  She isn’t guarded so much as she’s seen enough trail in her life that she doesn’t have time for trivial matters or people. She transferred to Briar U to continue her undergraduate degree in communications; she wants to be a broadcast sports journalist and has both the drive and the knowledge to be really good at it. When a misogynistic network executive blows off her interview for a coveted internship, she gets his attention by name dropping Jake Connelly, already drafted to the Edmonton Oilers once he graduates Harvard.

Jake Connelly, team captain of Harvard’s hockey team, is arrogant, talented, and hot.  He’s also self-centered.  That’s how he got to be as good as he is, staying focused on one goal—being the best. But Brenna gets to him in a way no other woman has before and he doesn’t seem to be able to leave her alone. He’s never been in a relationship, however, and is totally out of his element.  He’s adorable without trying, but given his habits of self-preservation, someone is going to get hurt…maybe more than one.

I was emotionally invested in this one.  All of Kennedy’s heroines are strong in their own way, I just really liked Brenna and wanted the people in her life to step up. Adulting is hard. There’s a lot of adulting that has to happen in The Risk.  Overall this installment is slightly darker, I mean Kennedy works in a Centipede reference, but mostly because the sarcasm is more exaggerated and more biting. Jake isn’t kidding when he thinks, “The sarcasm is strong with this one, my friends.”  The trials of Brenna’s high school years have somewhat exaggerated her independence and ramped up her badassness. (Is that a real word?)  She doesn’t put up with much from anyone.  It also means the funny parts are funnier.  Can we talk penises?  (That is the correct plural form, I looked it up.)  I don’t know if Kennedy made a bet with someone to see how many times she could include that word in a manuscript, but they turn up in the most hilarious places in her books.  All of them.  Penises are funny.

We also get to check in with some of the other guys.  Summer and Fitz are still annoyingly in love.  Hunter Davenport is actively working on getting over Summer by sleeping his way around the greater Boston area.  I mean why confine yourself to campus?  I won’t spoil it for you, but Mike Hollis is not left pining for Brenna.  He has a background storyline that, in true Hollis character, is total comic relief.  Bless Mike Hollis.

According to Kennedy’s website, we have to wait until October for book 3, titled The Play.  Hunter is the next obvious bachelor to need the challenge of the right woman in his life, but like Logan’s book The Mistake, there’s no obvious love interest that we’ve met yet. Maybe Jake’s friend Hazel?  Whomever she is, I’m looking forward to meeting her.

Everyone says I’m a bad girl. They’re only partly right—I don’t let fear rule me, and I certainly don’t care what people think. But I draw the line at sleeping with the enemy. As the daughter of Briar’s head hockey coach, I’d be vilified if I hooked up with a player from a rival team.

And that’s who Jake Connelly is. Harvard’s star forward is arrogant, annoying, and too attractive for his own good. But fate is cruel—I require his help to secure a much-coveted internship, and the sexy jerk isn’t making it easy for me.

I need Connelly to be my fake boyfriend.

For every fake date…he wants a real one.

Which means this bad girl is in big trouble. Nothing good can come from sneaking around with Jake Connelly. My father would kill me, my friends will revolt, and my post-college career is on the line. But while it’s getting harder and harder to resist Jake’s oozing sex appeal and cocky grin, I refuse to fall for him.

That’s the one risk I’m not willing to take.