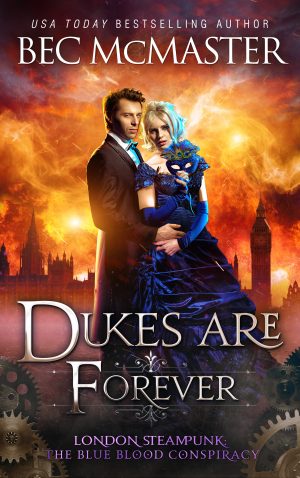 Green eyes narrowed and his wife pressed a hand to his chest, stepping forward until they were barely inches apart. “Just what are you up to?”

The Duke of Malloryn’s gaze fell to her lips. Those soft, rosy lips. He’d never tasted them. “As I stated, I need an heir.”

“Then throw me down on the bed and have your way with me. I believe that is how it works, does it not? And yet, you’re actually attempting to… seduce me.”

“You don’t trust a gentle touch.”

“I don’t trust your gentle touch.”

And yet, Adele wanted it. He could read it in the softening of her body and the way she leaned into him—even as she leashed her body’s physical needs. To win her over, he would need to enrapture that cool, rational mind too—because she’d seen right through his physical flirtations.

“You’re right. I have no need to make such efforts.” Malloryn’s lashes half-shuttered his eyes. “And yet, my conscience dictates I make them. I am not the sort of man who throws a woman down on his bed and simply takes what I want, like some sort of barbarian. I am the Duke of Malloryn.”

“Ah, arrogance.” Adele tipped her chin defiantly. “Now that I can believe. I would hardly call it conscience. You don’t have one. I must admit you had me at odds and ends yesterday in the carriage,” she said. “But I have been thinking about your proposition. Why now?”

“Because you’ve never glanced my way before.”

He sensed the doubt in her words and paused to consider how to play this. “If you think I haven’t glanced your way, then you should think again. Every day your laughter echoes through the house. Your perfume haunts my library. I can hear the water dripping off your skin when you bathe—”

“Even through the locked door between our rooms?”

“Especially through the locked door.”

“You’re the one with the key.”

Malloryn smiled. “Maybe we should unlock that door. Maybe tonight you should wear nothing but your diamonds when you retire.”

“And if I do, are you even going to make an appearance? Or am I going to be left wanting again?”

So she had awaited him last night. “I don’t know. I think I like the idea of you waiting for me.” Brushing his knuckles against her bodice, he heard her faint gasp as they rippled over the hardened edge of her nipple. “Waiting and desperate for my touch.”

Adele stepped back, her eyes glittering. “Now it begins to make sense. This is a game to you. It’s not merely your sudden requirement for an heir.”

“Everything in life is a game. It’s simply a matter of who plays it best.”

“You think you can make me enjoy this, don’t you? Did you imagine I would surrender? Did you think I would melt beneath your touch and beg you for more? I suppose I must seem the ultimate challenge. I don’t like you. You don’t like me. Did you imagine you would steal my heart?”

“I didn’t think you had one, Adele. Isn’t that what you said once?”

“But you want me to beg,” she whispered, her eyes glittering with heat. “Don’t you?”

For a second, he felt an answering heat swell within him too. He’d thought this would be a challenge, but no more than any other woman who guarded her heart. It had seemed a forgone conclusion. He was the Duke of Malloryn, an expert in both understanding the base desires of a person and wielding such desires with a metaphorical lash. Adele would surrender. A fun game while it lasted, but not a long one.

But the challenge in her eyes….

She’d read him too.

“You couldn’t,” she shot back, “even if you engaged all of your prowess. My heart does not rule me. I will never allow any man to own my happiness, or my desires.”

Now it was getting interesting.

He stroked the back of his gloved hand down her bodice, barely touching the silk. Adele’s breasts lifted as she smothered a swift intake of breath.

But it was there.

And they both knew it.

“Are you daring me to try?”

She set one hand to his chest and pushed. “Be careful, Your Grace, that I do not consider my own attempt. I’m not the only one who can fall.”

Malloryn captured her hand and held it there, where she could feel the thump of his heart. “I should like to see you try.”

A breathless moment extended as they beheld each other.

But for the first time he felt something else between them. He’d been furious when she’d first trapped him into marriage, but there’d always been a tiny little part of him that had been intrigued.

Nobody got the better of the Duke of Malloryn.

Lifting her gloved fingers to his lips, he brushed his lips there, soft and decadently slow, even as he never took his eyes from her.

“What are you suggesting?” she murmured.

“Isn’t that what we’ve been engaging in all along?”

“Not like this.” He slowly turned her wrist, mouth whispering over the thin black silk that hid her pulse point from him. “Carnal warfare. The first to surrender loses. I’ll even allow you a head start. You dictate how far each encounter goes.”

“You’re the one who said you were innocent,” he pointed out. “It seems I have an unfair advantage.”

He’d said it to give himself the luxury of extending this chase between them—to give himself time to discover if his wife was innocent or dangerous. But the surge of interest warned him: Adele was dangerous in more ways than one.

Because he wanted her.

And desire was possibly the only thing that could undo him.

“Innocent of pleasure, perhaps. Not of men’s desires. Or their arrogance. I accept your deal.” Then she set her hand against his chest and pushed insistently. “But since I am in control of our game, it seems I must decline tonight’s advances. Tonight you can go unfulfilled.”

“‘Til tomorrow then.” Malloryn couldn’t deny it wasn’t disappointment that filled him, but interest.

He allowed her to escape.

“Dream of me,” she whispered, backing away from the folly, lantern-light gleaming on her blue skirts. “All alone, wearing nothing more than my diamonds.”

Why had he ever thought inexperience took away her edge?

“I will,” he promised darkly.

And then she turned and dashed away through the gardens, glancing back over her shoulder, just once, to make sure he was watching.

Malloryn felt his weight shifting forward, the predator within him drawn to chase her. To capture her. To win. Adele’s silvery laughter caught his ear as she read it on his face.

And then she was gone.

He crushed his fingers into a fist and forced himself to rein his darker urges in. Every part of that act had been choreographed to an inch, designed to intrigue him. And she’d succeeded. If they’d been dueling, then she had drawn first blood.

What a dangerous, dangerous woman.

He’d never been more convinced she was working for the enemy.

A compromising situation forced him into marriage. But has his wife been working for the enemy all along?

In a steam-fuelled world where vampires once ruled the aristocracy, the Duke of Malloryn knows his nemesis, Lord Balfour, has finally returned to enact his plans of revenge.

Malloryn can trust no one, and when incriminating photographs surface—of an enemy agent stealing a kiss from his wife—he is forced to question just why his wife, Adele, trapped him into marriage.

Is she an innocent pawn caught up in a madman’s games, or is she a double agent working against him?

Adele Hamilton may have agreed to a loveless marriage in order to protect herself, but that doesn’t stop her heart from yearning for more.

Her husband promised her a cold marriage bed. He swore he’d never touch her. But suddenly he’s engaged in a campaign of seduction—and the only way to keep her wits about her is to fight fire with fire.

The ruthless beauty has locked her heart away, but can she deny the passion that flares between them? And when the truth emerges, will she be the only thing that can save Malloryn’s life?

Or the weapon his enemy will wield against him?