I’m super excited to feature historical mystery author Deanna Raybourn on the blog. I discovered her amazing Veronica Speedwell Mystery series not even a year ago, and it has quickly become one of my all-time favorites. Today we are celebrating the release of the fourth title, A Dangerous Collaboration, with a little Q and A with Ms. Raybourn. 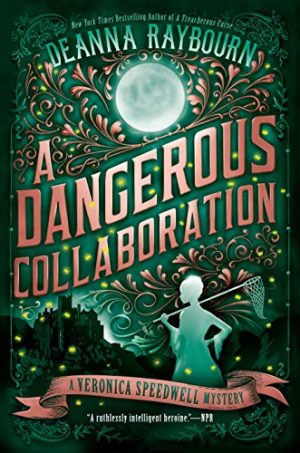 Jen: We are celebrating the release of your fourth Veronica Speedwell mystery: A Dangerous Collaboration. Veronica is a mystery-solving, strong-willed Victorian woman with a few dangerous secrets. What is your favorite part about writing Veronica and creating her persona? And share with us… why butterflies?

DR: Veronica is an endless joy to write for so many reasons! The fact that she IS strong-willed is a big part of that. Characters can get themselves into trouble either by hanging back and acting too late or by rushing headlong into danger; Veronica is a rusher. She will fling herself into peril because she would rather act and be wrong than hesitate and lose the opportunity to make her own choices.

The butterflies came about because I’ve done a great deal of research into Victorian lady explorers. Many of them were natural historians, and one in particular—Margaret Fountaine—was a lepidopterist who traveled around the world, collecting butterflies and lovers. She was dynamic, intriguing, and nothing like what people expect Victorian women to be. She was my inspiration for Veronica, so the butterflies are an homage to her.

Jen: I wrote in my review of A Treacherous Curse (book 3) of Veronica and her companion Stoker: “the constant push and pull between the two kindred spirits sparks a smoldering sexual tension that doesn’t overshadow the story or the friendship.” Can you share with us if there will ever be more than a friendship between the pair?

DR: To me, there’s already more than a friendship between them—and I think there has been from the beginning. We see a little more clearly than they do that they are SO meant to be together. But they both have baggage in the form of secrets and trauma and former relationships gone bad. Neither of them wants a conventional liaison, so it’s a delicate thing to figure out exactly where to draw the boundaries. How committed will they be? Will their relationship ever become physical? It’s a continual tightrope act!

Jen: I discovered your writing just last year, via the audiobook versions of the first three Veronica Speedwell stories. I absolutely love Angèle Masters’ performance. Did you have any input on who would bring Veronica to life? Do you take part in the audiobook production process in any way?

DR: I don’t have any input, but it’s a tribute to the care that Berkley* takes with every aspect of publication that they have given Veronica’s adventures such a gifted narrator! I hear from a lot of readers how much they adore her interpretation of the books.

*Note from Jen: the audiobooks are published by Recorded Books.

Jen: You spend a lot of time in the past when writing. What are your current pop culture favorites? Any good shows we should binge watch or movies to see?

DR: I am a HUGE fan of KILLING EVE, the BBC drama about a female assassin and the woman who is tracking her down. It’s very cat-and-mouse, so sharp and just gorgeously written. I just binge-watched Netflix’s UMBRELLA ACADEMY and loved it for pure over-the-top escapism. Netflix also has a great sci-fi series called TRAVELERS that is bonkers good.

Jen: What are your favorite activities in your down time?

DR: I love to travel. My husband and I went to Greece last year for the first time, and it was absolutely magical! I also spend way too much time on Twitter and looking at pictures of other people’s dogs on Instagram.

DR: I adore Golden Age mystery, biography, travel memoir. I’ve just started Elsa Schiaparelli’s autobiography, SHOCKING LIFE, which feels like it’s going to be great fun. Occasionally, I get sneak peeks at upcoming titles (job perk!) and there are two upcoming releases I’m excited to share: MILADY by Laura L. Sullivan (July) and SOUTHERN LADY CODE in April from Helen Ellis. Ellis’s is a collection of her whip-smart essays while Sullivan’s is a Musketeer homage from the perspective of Milady de Winter. Both highly recommended!

Thank you so much, Deanna, for coming by and answering a few questions.

Readers: You can catch my audiobook review of A Dangerous Collaboration later today.

Victorian adventuress Veronica Speedwell is whisked off to a remote island off the tip of Cornwall when her natural historian colleague Stoker’s brother calls in a favor. On the pretext of wanting a companion to accompany him to Lord Malcolm Romilly’s house party, Tiberius persuades Veronica to pose as his fiancée–much to Stoker’s chagrin. But upon arriving, it becomes clear that the party is not as innocent as it had seemed. Every invited guest has a connection to Romilly’s wife, Rosamund, who disappeared on her wedding day three years ago, and a dramatic dinner proves she is very much on her husband’s mind.

As spectral figures, ghostly music, and mysterious threats begin to plague the partygoers, Veronica enlists Stoker’s help to discover the host’s true motivations. And as they investigate, it becomes clear that there are numerous mysteries surrounding the Romilly estate, and every person present has a motive to kill Rosamund… 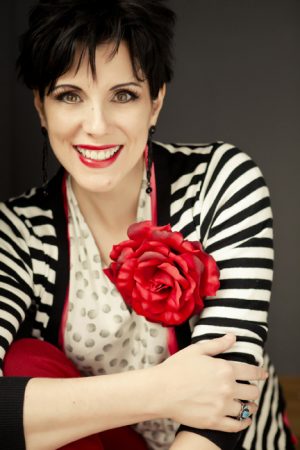 A sixth-generation native Texan, New York Times bestselling author Deanna Raybourn grew up in San Antonio where she met her college sweetheart. She married him on her graduation day and went on to teach high school English and history. During summer vacation at the age of twenty-three, she wrote her first novel, and after three years as a teacher, Deanna left education to have a baby and pursue writing full-time. Fourteen years and many, many rejections after her first novel, she signed two three-book deals with MIRA Books.

Deanna’s debut novel, Silent in the Grave, published in January 2007. The first in the Silent series, the book introduces Lady Julia Grey, an aristocrat bent on investigating the mysterious death of her husband with the help of the enigmatic private enquiry agent Nicholas Brisbane. From the drawing rooms of the aristocracy to a Gypsy camp on Hampstead Heath, Silent in the Grave deftly captures the lush ambience of Victorian London.

The series continues with the second book, Silent in the Sanctuary (January 2008), a classic English country house murder mystery with a few twists and turns for Brisbane and Lady Julia along the way. Silent on the Moor (March 2009), set in a grim manor house on the Yorkshire moors, is the third adventure for Lady Julia and the mysterious Brisbane.

March 2010 saw a departure from the series with the release of The Dead Travel Fast, a mid-Victorian Gothic thriller that features novelist Theodora Lestrange as she leaves the safety and security of her Edinburgh home for the dark woods and haunted castles of Transylvania. Deanna turns once more to Lady Julia and her companions with Dark Road to Darjeeling (October 2010) which features an exotic setting in the foothills of the Himalayas and the introduction of an arch-villain. The fifth book in the series, The Dark Enquiry, follows the return of Lady Julia and Brisbane to London for their most puzzling adventure yet. The Dark Enquiry hit the New York Times Bestseller list the week before its official release in July 2011. The digital exclusive novella Silent Night, published in November 2012, is a bright Christmas adventure set in Julia’s ancestral home in the Sussex countryside.

Deanna’s next release, A Spear of Summer Grass (May 2013), chronicles the adventures of a scandalous flapper heroine in Africa and the lives she changes along the way. It is listed as one of Goodreads’ most highly anticipated books of 2013 and was preceded by Far in the Wilds, an exclusive digital prequel novella (March 2013). A Spear of Summer Grass received a starred review from Library Journal. Deanna carried on the theme of 1920s adventure with City of Jasmine (2014) and Night of a Thousand Stars (2014), but is delighted to return to Victorian London with the September 2015 hardcover release of A Curious Beginning, the first mystery featuring butterfly-hunting sleuth, Veronica Speedwell and her natural historian sidekick, Stoker. Veronica returned in 2017’s A Perilous Undertaking, and A Treacherous Curse, 2018. Don’t miss her next adventure, A Dangerous Collaboration, in March 2019.

Deanna’s novel Silent in the Grave won the 2008 RITA® Award for Novel with Strong Romantic Elements and the Romantic Times Reviewers’ Choice Award for Best First Mystery. The Lady Julia Grey series has been nominated for several other awards, including an Agatha, three Daphne du Mauriers, a Last Laugh, four additional RITAs, and two Dilys Winns. Dark Road to Darjeeling was also a finalist for the Romantic Times Reviewers’ Choice Award for Best Historical Mystery as well as a Romantic Reviews‘ finalist for Best Book of 2010. In April 2015, the Lady Julia books were optioned for development as a television series in the UK by Free@Last TV. A Treacherous Curse, the third Veronica Speedwell Mystery, was nominated for the 2019 Edgar Award for Best Novel.