Thanks for checking out the blog tour for A Chip and a Chair, the conclusion to the Seven of Spades series!

Just as the Seven of Spades investigation is closing in, an act of terror devastates Las Vegas. In order to save the city they love, Levi and Dominic may need the help of the very killer they’ve been hunting…

About A Chip and a Chair 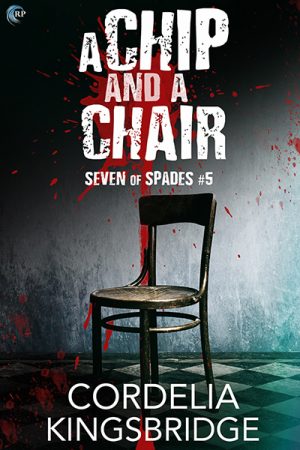 It’s time to lay all the cards on the table.

Detective Levi Abrams and PI Dominic Russo are reunited and more committed to each other than ever, but they can’t truly move forward with their lives until the serial killer who’s been tormenting them is behind bars. When a secret burial site is discovered in the desert with the remains of the Seven of Spades’s earliest victims, that goal finally seems within reach.

But just as the net is tightening, the neo-Nazi militia Utopia launches their master plan with a devastating act of terror that changes the landscape of Las Vegas forever. As Levi and Dominic scramble to prevent the city’s destruction, they’re opposed by treacherous forces that propel them toward catastrophe. In the end, Levi’s fate may rest in the hands of the very killer he’s been hunting.

The race to save Sin City is on, and these players are going for broke. No matter how hopeless things seem, as long as they’re together and they’ve got a chip to play and a chair to sit in, they’re still in the game.

Check out the Seven of Spades series!

To celebrate the release of A Chip and a Chair one lucky person will win a $10 Riptide Publishing gift card! Leave a comment with your contact info to enter the contest. Entries close at midnight, Eastern time, on March 16, 2019. Contest is NOT restricted to U.S. entries. Thanks for following along, and don’t forget to leave your contact info!