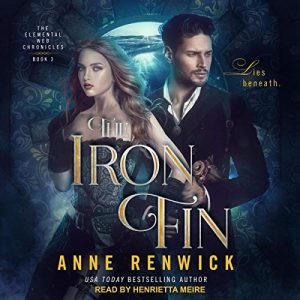 The Iron Fin is the third historical/steampunk romance in the wonderful Elemental Web Chronicles. While loosely related to the first two books (same world and a couple overlapping characters), the story shifts location and brings a new set of characters to the forefront. This time around we meet Isa, a widowed healer who is caught between two worlds; neither accepting her for her dual heritage. She’s part Fin, a human who has biological adaptations for swimming and diving at depths, and part Scottish, longing to become a medical doctor. Both groups find her tarnished by the heritage of the other.

Naval officer and doctor Alec McCullough doesn’t care about Isa’s heritage, only that she is intelligent and his lead to discovering the truth about the mysterious biotech octopus that is attacking fishermen. Yet the more he works with the alluring Isa, the stronger their attraction pulls, and soon they whisper their desires to one another. Side-by-side, the pair works to uncover the truth and save the Fin.

The Iron Fin is a wild adventure, bringing along compelling new technology and interesting new characters. Ms. Renwick creates a myriad of fascinating gadgets using science and engineering to back it up. Much to my inner geek’s joy, both Isa and Alec are scientists, weaving into the storyline the explanations of the tech, which is critical to the plot and solving the case. The pair respects one another on a level that is not common for the time, allowing them to share resources and spill secrets. I love that they develop a deep sense of trust, confiding in one other so that they can unravel the mystery. The only negative I really had while listening was that the book felt long at times, with scenes that could have benefited from content editing to trim it down a bit.

Alec and Isa’s congenial natures give way to a passionate affair. While the pair shares an attraction at first site, the more time they spend together, the deeper the feelings run. And while both agree to a short-term affair, Alec realizes all too soon that he is falling hard for Isa, wanting more. Yet because of her previous marriage and the restraints placed on her career, she cannot give herself completely to Alec. Their ups and downs sent my heart on a roller coaster.

Narration: Once again, British-born actress Henrietta Meire, shares the story in alternating third person POVs. While her narrator voice remains a neutral, British-accented female, the dialogue is adjusted to fit the character, using a multitude of accents, including British and Scottish. While I’m not an expert, I feel that she accurately varies the speech based on socio-economic conditions and the locale of the character. Each character is unique and identifiable. I enjoy her performance quite a bit.

Overall, I enjoyed much about The Iron Fin, from the change in scenery to the new characters and especially the mysterious Fin folk. While the gadgets and tech sucked me into the story, I loved the passion and romance between Isa and Alec.

Isa McQuiston is caught between two worlds. Strange creatures are attacking her people, their injuries beyond her medical expertise. More than one fisherman has been tossed ashore by the waves, drained of blood, a severed tentacle piercing his flesh. To find answers, she must forge a cautious alliance with the outsider making inquiries… even if he does present an almost irresistible temptation.

Dr. Alec McCullough, an injured naval officer, is restless and bored. Until his brother—an agent for the Crown—offers him an assignment: investigate a recent rash of unexplained octopus attacks. On the wet and windy Hebridean Isles, his every effort is met with resistance. Coaxing an attractive young widow—the local healer—to allow him to examine the latest victim only leads to further complications.

A fusion of living and mechanical components, the creatures follow instinct, but also command. Together, they uncover layers of deceit, revealing traitorous tentacles that entangle both their lives. As those behind their creation callously sacrifice innocent lives in pursuit of their goals, Isa and Alec struggle to forge a future together while attempting to prevent a disaster of international proportions.

Now is your chance to enjoy this awesome series. Ms. Renwick is generously donating an audiobook download of winner’s choice one of the Elemental Web Chronicles backlist to give to one (1) lucky commenter. To enter, please fill out the Rafflecopter form AND leave a comment at the end of this post letting us know which book you’d like if you won (see list below).

The giveaway is open during the time specified on the Rafflecopter form. Winner(s) chosen at random from all eligible entries. This contest is open internationally where not prohibited by law. Open to participants, 18 years or older, who are legally allowed to participate in such a contest as allowed by their local laws. All federal, state, local, and municipal laws and regulations apply. Void where prohibited. No purchase necessary. By participating in the contest, participants agree to be bound by the decisions of the contest sponsor. Prize will be delivered by the author. This blog, its reviewers, and the owner are not responsible for items lost in the mail. By entering this giveaway, participants agree to abide by these terms.