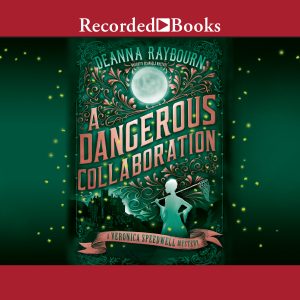 Although A Dangerous Collaboration opens on the heels of the previous book, the story quickly jumps forward six months, to a time after Veronica and Lady Cordelia’s hasty expedition to Madeira. While Veronica could not vocalize her need to escape Stoker, the truth of it is that she is terribly confused by her feelings, and after seeing how is former wife destroyed him, she does not wish to cause him further pain. She hopes by escaping, she can think rationally about and evaluate her feelings. I love this about Veronica.

However, once she returns to London, things get even more muddy when Stoker’s eldest brother, Tiberius, convinces Veronica to join him on a journey to visit his childhood friend on a remote island where she can collect a rare butterfly specimen. With Stoker in tow, the trio discover that their true intention on the island is to discover what happened to the lady of the manor, Rosamund, who disappeared on her wedding day.

I absolutely LOVED A Dangerous Collaboration, and it is my favorite book of the series thus far. The whole story had a different feel, but I enjoyed it all-the-more. Unlike the previous stories, A Dangerous Collaboration is located almost entirely away from London and the omnipresent Special Branch of Scotland Yard. Additionally, Veronica and Stoker are very much out of sync for at least half of the book, and it messes with Veronica. She can’t think of anything else, and because the story is shared from Veronica’s first person POV, the listener also can’t think of anything else. The experience is quite different from the earlier books. As a fan of romance, of course I’d love to see Veronica and Stoker together. But their chemistry, which transcends normal and usual friendships, is used for working together, solving crimes, and uncovering mysteries of the natural world. It took time for the pair to fall back in sync and make progress on the mystery this time.

But never fear listeners, Veronica and Stoker find their groove, and together with Tiberius, wade through and unravel the mysteries of the Romilly estate. While I did guess the who of whodunit, it was truly a guess, and I enjoyed listening to the characters solve the multilayered puzzle, along with the messy revelations that bubbled to the surface. And once again, the author gives Veronica and Stoker some of the most perfect moments, ones to be savored and enjoyed time and time again.

Narration: Ms. Masters’s performance of Veronica is perfect. She nails Veronica’s no nonsense and adventurous attitude. But she also captures Veronica’s just-under-the-surface vulnerability. Additionally, she gives Stoker a sexy, unfettered gruffness that sharpens with concern when Veronica is in danger or when the pair is sparring. Although Tiberius and Stoker’s voices are very similar, almost each character is identifiable just by voice alone. Ms. Masters’s range of accents is excellent and sound authentic to this untrained ear.

In the end, A Dangerous Collaboration is an excellent addition to the Veronica Speedwell series, and one of my favorite books.

Victorian adventuress Veronica Speedwell is whisked off to a remote island off the tip of Cornwall when her natural historian colleague Stoker’s brother calls in a favor. On the pretext of wanting a companion to accompany him to Lord Malcolm Romilly’s house party, Tiberius persuades Veronica to pose as his fiancée–much to Stoker’s chagrin. But upon arriving, it becomes clear that the party is not as innocent as it had seemed. Every invited guest has a connection to Romilly’s wife, Rosamund, who disappeared on her wedding day three years ago, and a dramatic dinner proves she is very much on her husband’s mind.

As spectral figures, ghostly music, and mysterious threats begin to plague the partygoers, Veronica enlists Stoker’s help to discover the host’s true motivations. And as they investigate, it becomes clear that there are numerous mysteries surrounding the Romilly estate, and every person present has a motive to kill Rosamund…