Audiobook review: Consumed by You 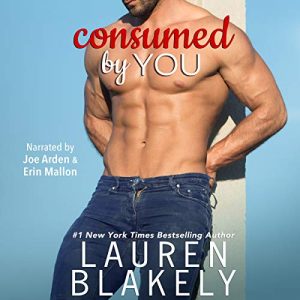 I enjoyed Consumed by You more than the previous book, Melt for Him. I enjoy a second chance romance over a romance that started as a one night stand. I think because the former romance comes off as too insta-love for me. I like it when a couple has a history, the love they share seems more believable.

Travis and Cara have wanted different things, she wants a HEA, but he has never wanted a serious relationship. It’s not that he is against love for other people but after seeing how his father’s death destroyed his mother when he was young, he never wants to give anyone that much power of him.

The two started a romance one summer between high school and college ten years ago. Going in, they both knew there was an expiration date because they were going to different colleges. They then hooked up again a few years later when they were both visiting home. Now they are both home for good, they can’t fight the sexual chemistry that’s still there. But Erin doesn’t want to just have another fling with Travis, she is looking for a future with a man and she knows all too well Travis is not that man.

Erin decides while working with Travis to train his new puppy, Henry, the way to get him out of her system so she can move on it to have one last fling with him. Since she is training Henry for two weeks before a firemen’s charity auction she makes a deal with Travis to have hot sex with him in order to get over him. (This always works. Yeah, right!) Travis agrees, but as the two weeks go by they both realize they are in love. Well, Erin realizes it much sooner than Travis, but he knows he is having strange feelings that he can’t put a name to. Watching these two find their HEA was hot, funny and tearful. I was totally consumed by their story and loved them as characters.

Consumed by You is told through changing POVs with Joe Arden narrating Travis’s POV and Erin Mallon narrating Cara’s POV. Erin is still my preferred narrator over the two but I’m warming up to Joe’s voice.

My Ratings:
Story: B+
Narration:
Joe Arden: B-
Erin Mallon: B+

Dog trainer Cara Bailey wants to find “the one,” but fantasizing about her sexy-as-hell client, firefighter Travis Jansen, is getting in the way. Her only option? Get the confirmed bachelor out of her system – in every position possible – so she can settle down with Mr. Right. Starting right now.

Travis doesn’t do relationships, so no matter how badly he wants the pretty little brunette, he keeps his distance. Until Cara goes and changes the game. She’ll fulfill all of his fantasies if he agrees to walk away when it’s over. But when the wildfire between them blazes out of control, it will consume everything – and everyone – in its path…