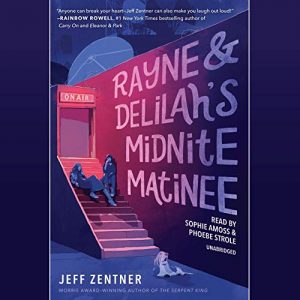 I’m not a big young adult reader (hello I’m 40 something), but while finishing my BA in English, I took YA Literature as an elective. The class was geared more to English majors who were going into teaching, but the time for the class worked with my work schedule so I signed up for it. I’m glad I did because I read some amazing books I wouldn’t normally have picked up on my own. That’s where I discovered Jeff Zentner’s The Serpent King, his debut novel and it blew me away! He continued to astound me with his second novel, Goodbye Days. After falling in love with Zentner’s writing style I knew without a doubt I would read anything he writes. So I preordered Rayne & Delilah’s Midnite Matinee once order links were available.

Rayne & Delilah’s Midnite Matinee follows two best friends, Josie and Delia, in their last year of high school. Their story is centered about the cheesy horror show they host in the same vein as Elvira Mistress of the Dark and Mystery Science Theater 3000. Dressed in cheesy vampire costumes as Rayne and Delilah, their tv personas, they intro the weekly movies and add in bits like dog weddings.

They got into the show because Delia used to watch the movies with her father before he left, and Josie wants to go to college and work within the tv industry. Through the show, they became best friends.

Delia has an understandable chip on her shoulder about her dad leaving her and her mom. There are times when Delia is more like the mom in their relationship. Josie is the one bright thing in Delia’s life. Josie has a great family and has plans for college, but she starts to feel guilty about leaving Delia behind if she leaves the town of college.

Both feel like the only way for them to stay together is to keep the show going. They take a road trip to Florida to a convention for people in the horror genre in hopes of connecting with a once famous horror host and producer, Jack Divine. They think if they can get him to work with them, their show will become bigger, keeping them together. Divine is anything but divine. After some really funny mishaps on the trip, the girls start to realize their dreams for the future are not the same.

Rayne & Delilah’s Midnite Matinee is a story about friends learning to come to grips with growing up and realizing that there are other paths to happiness. Not everything has to be a big adventure to be worth wild.

“Sometimes small and unspectacular things can be a universe.”

Zentner writes books any age will enjoy because he writes about the human condition. Relationships about friendships and family. On the surface, his books seem to be about teenagers and their problems, but his stories and characters have so much depth anyone can be related to them. After reading/listening to one of Jeff’s books, I’m left thinking about it well past the last page.

Zenter knows how to make you cry and make you laugh.

“I’m not a millennial, and also that’s a dumb thing old people say. Anyway, this has been as fun as holding in a fart, but we really must go.”

“Should not hold in poots. Is bad for liver,” Yuri says.

Poor Josie and Delilah have heard farts are bad for the liver from too many stupid people. LOL!

I recommended the audiobook format of Rayne & Delilah’s Midnite Matinee to my library and they purchased it. I had planned to switch between reading and listening (doing chores and crocheting) but after I started the audio and loved the narration, so I stayed with the audiobook. Both Sophie Amoss (Josie) and Phoebe Strole (Delia) are new narrators for me and they were a pure joy to listen to.  Sophie Amoss voice reminded me of Emma Glavin who narrates Kresley Cole’s Arcana Chronicles. Both narrators delivered an outstanding performance. They truly made me feel all the emotions Josie and Delia felt. I look forward to listening to more of their narration work.

My Ratings:
Story: A+
Narration: A

But with the end of senior year quickly approaching, the girls face tough decisions about their futures. Josie has been dreading graduation, as she tries to decide whether to leave for a big university and chase her dream career in mainstream TV. And Lawson, one of the show’s guest performers, a talented MMA fighter with weaknesses for pancakes, fantasy novels, and Josie, is making her tough decision even harder.

Scary movies are the last connection Delia has to her dad, who abandoned the family years ago. If Midnite Matinee becomes a hit, maybe he’ll see it and want to be a part of her life again. And maybe Josie will stay with the show instead of leaving her behind, too.

As the tug-of-war between growing up and growing apart tests the bonds of their friendship, Josie and Delia start to realize that an uncertain future can be both monstrous… and momentous.