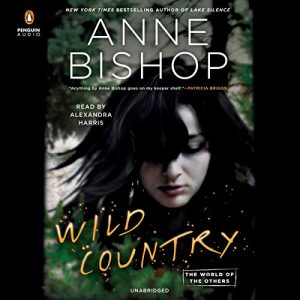 Wild Country is the second title in The World of the Others spinoff series; however, unlike the first book in series, Wild Country pulls a lot from the original The Others series, including familiar characters and locales. Jumping back in time, the story takes place at the same time as Etched in Bone, the final book of the original series. This did cause some confusion for me trying to keep the timeline straight in my head, especially when the residents of Bennett would hear about the events in Lakeside that were the focus of Etched in Bone.

This time around, the story moves west to the desolate town of Bennett and nearby Intuit settlement, Prairie Gold. The human residents of Bennett were killed during the great culling by the Elders (The Others series). In an effort to protect the region, the Elders want Bennett to remain controlled by the Terra Indigene while allowing the “right kind” of humans to repopulate the area. Tolya Sanguinati is the head of the new government while Virgil Wolfguard is sheriff. Prairie Gold-Intuit leader, Jesse Walker, plays a key role, as does newcomer Jana Paniccia, a female human police officer. The story focuses on the different groups of humans, Intuits, and Others who move into Bennett for work or to cause mischief.

Wild Country is engrossing, and I quickly came to care about the characters and what became of Bennett. Overall, the book has a darker tone that the previous stories. Many of the Terra Indigene have rough edges and carry less tolerance for humans because the Others in this part of the world were slaughtered by the Humans First and Last movement. They don’t necessarily like humans, and even those who tolerate the humans aren’t above expressing the general disgust felt towards all humans after the fighting is over. I did enjoy the story and found it an interesting contrast to previous books, especially how the dominant male wolf doesn’t like humans and wants nothing to do with them. In the end, I was left feeling a bit unsettled, but a little hopeful. I really want more from Bennett because I feel its story isn’t over.

Narration: As with the original series, Alexandra Harris provides the narration for Wild Country, and like its predecessors, the story is shared via multiple third person POVs. Matching her performance from the earlier books, Ms. Harris sounds young and innocent. Her cadence matches the writing style, which can come in phrases – not always complete sentences. Her performance is familiar, yet different, and Ms. Harris is the voice of the series for me. I like that I never was confused that I was listening to the characters from earlier books, yet each voice still felt well-known. The Crow and Sanguinati voices are similar to previous books. Additionally, many of the Others are more primitive in this area-unused to human interaction-and their voices and speech patterns mimic this.

Overall, Wild Country is an excellent addition to the World of the Others. The book shares more of the wild areas and those deadly creatures that inhabit it. The story felt a bit darker to me because of the hearts of the Others who inhabit this area do not wish to be friends with the humans. I truly hope we get from from Bennett as their story isn’t over.

There are ghost towns in the world—places where the humans were annihilated in retaliation for the slaughter of the shape-shifting Others.

One of those places is Bennett, a town at the northern end of the Elder Hills—a town surrounded by the wild country. Now efforts are being made to resettle Bennett as a community where humans and Others live and work together. A young female police officer has been hired as the deputy to a Wolfgard sheriff. A deadly type of Other wants to run a human-style saloon. And a couple with four foster children—one of whom is a blood prophet—hope to find acceptance.

But as they reopen the stores and the professional offices and start to make lives for themselves, the town of Bennett attracts the attention of other humans looking for profit. And the arrival of the Blackstone Clan, outlaws and gamblers all, will uncover secrets… or bury them.