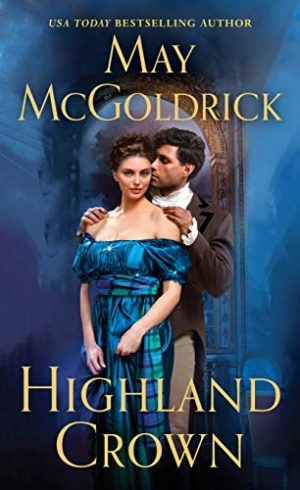 Highland Crown is the first in a trilogy by May McGoldrick. It is set in Scotland in the 1820s. I was drawn to the novel for a several reasons; first I have Scottish heritage and know next to nothing about the country. I thought this could be an interesting way to discover somethings; I was not wrong. Second, it is outside of the traditional historical romance novels that I read, no earls looking for redemption or maidens looking to find their own way or score a rich husband. It could be argued that this was a coming of age/into one’s own story but it didn’t feel like a typical telling of either. Finally, the setting was refreshingly new and unexpected for someone who has been reading a large number of novels set in drawing and ballrooms.

I had a couple of issues with the novel. I could have lived without all the Sir Walter Scott angst at they beginning and the constant references throughout the novel, although that was a minor irritant. My biggest concern was I felt that the main characters lacked development. Cinaed has nightmares clearly connected to his past but the reasons for them are never answered, and we get only the smallest insights into Isabella and her past. We know how and why she chose her profession but we don’t know much more. Who are these people? What drives them? Outside of their connection fueled in life and death situations and their physical attraction for one another, what fuels their relationship? I realize all the these things may be answered in the next two novels but given that they are more likely to focus on Isabella’s sister and stepdaughter I’m not sure how that will be accomplished. This brings me to my last concern, the number of novels. This is slated to be a trilogy, but given the number of unanswered questions at the end of the book I don’t see how it will be possible to answer all of them AND develop another complete story line around another couple, which is what the authors say will happen. If it is to be a four-book series, I could see the probably of getting all the answers to the questions swarming around Cinaed and Isabella in the next book and then focus on the sister and stepdaughter in the final two books of the series, but that is not what the authors proposed at the end of this novel, so it will be interesting to see how everything comes out.

Overall, the story line moves along quickly with plenty of twists and turns while helping us watch Isabella come into her own. There is strong chemistry between Cinaed and Isabella and just the right amount of romance without overshadowing the overall story arch. If you are new to historical Scottish romance this would be a good introduction. There is just enough real history to offset the fictional aspects and fuel the story and you get to know the characters. Even with the above mentioned issues, I felt like it was a strong story and I look forward to reading the next novel in the trilogy.

Perched on the North Sea, this port town―by turns legendary and mythological―is a place where Highland rebels and English authorities clash in a mortal struggle for survival and dominance. Among the fray is a lovely young widow who possesses rare and special gifts.

A true beauty and trained physician, Isabella has inspired longing and mystery―and fury―in a great many men. Hunted by both the British government and Scottish rebels, she came to the Highlands in search of survival. But a dying ship’s captain will steer her fate into even stormier waters. . .and her heart into flames.

Cast from his home as a child, Cinaed is a fierce soul whose allegiance is only to himself. . . until Isabella saved his life―and added more risk to her own. Now, the only way Cinaed can keep her safe is to seek refuge at Dalmigavie Castle, the Mackintosh family seat. But when the scandalous truth of his past comes out, any chance of Cinaed having a bright future with Isabella is thrown into complete darkness. What will these two ill-fated lovers have to sacrifice to be together…for eternity?