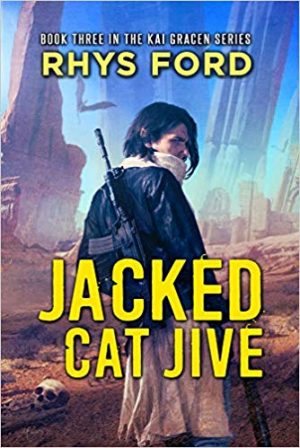 Regardless of the number of books I’ve read in the interim, I was thrilled to hear that Rhys Ford was releasing another story in the Kai Gracen series. It’s been more than two years since its predecessor, Mad Lizard Mambo, and, as excited as I was, I couldn’t help worrying a little about how the overall layout of things might have changed. Happily, Jacked Cat Jive is just as full of life as the other titles, and I didn’t mind getting hooked all over again one bit.

Even though I just really like all three books in the series, I recommend reading them in order to better understand the universe the author has created. Set primarily in San Diego in the aftermath of the cataclysmic “Merge” of the elfin and human worlds, the Kai Gracen series is filled with hunger, prejudice, and plenty of things that like to kill. And, although the creatures fighting for their place in the altered landscape might be different, and privilege includes simply seeing the sky on a regular basis, the capacity for hatred remains the same.

As has ever been the case with these books, Jacked Cat Jive reaffirmed just how much I adore Kai, his unique mix of unwavering devotion and sharp edges as perfect as tasting sugar off a switchblade. He is so endearing that reading these stories always hurts a little, and the hits Kai takes this time around made me fear for him on a lot of levels. But, Kai is changing, though he’s been fighting it every inch of the way, and the reluctant expansion of his limited attachments warmed me to the bone.

At this point, I find it’s impossible to talk about Kai without including Ryder. No longer the oblivious, entitled aristocrat, he’s becoming battle-tested, thoughtful, and roughened at the seams, all thanks to Kai. Theirs is an attachment built on learning and accepting—not to mention nearly dying several times—and it has been a tremendous pleasure to watch their relationship evolve from attraction to affection. And while I want Kai to be happy more than anything, their ongoing dance is a real beauty, and one it’s better not to hurry.

Rhys Ford has a knack for seasoning the perilous with a considerable dash of absurdity, and I’ve seldom enjoyed the results as much as I did in Jacked Cat Jive. Kai has run out of time to deny the truths of his own biology, as well as his ancestry, and dealing with the losses on his own just might be more than he can take. New insights into his previously established relationships also explained quite a lot about their place in Kai’s heart, making me care for them in ways I hadn’t before. Even Dempsey. As an added bonus, I recently read that the wonderful Greg Tremblay has signed on to narrate the audiobook, which I’ll be greedily adding to my collection as soon as it’s available.

Stalker Kai Gracen knew his human upbringing would eventually clash with his elfin heritage, but not so soon. Between Ryder, a pain-in-his-neck Sidhe Lord coaxing him to join San Diego’s Southern Rise Court, and picking up bounties for SoCalGov, he has more than enough to deal with. With his loyalties divided between the humans who raised him and the Sidhe Lord he’s befriended and sworn to protect, Kai finds himself standing at a crossroads.

When a friend begs Kai to rescue a small group of elfin refugees fleeing the Dusk Court, he’s pulled into a dangerous mission with Ryder through San Diego’s understreets and the wilderness beyond. Things go from bad to downright treacherous when Kerrick, Ryder’s cousin, insists on joining them, staking a claim on Southern Rise and Kai.

Burdened by his painful past, Kai must stand with Ryder against Kerrick while facing down the very Court he fears and loathes. Dying while on a run is expected for a Stalker, but Kai wonders if embracing his elfin blood also means losing his heart, soul, and humanity along the way.

And if it’s even worth it.