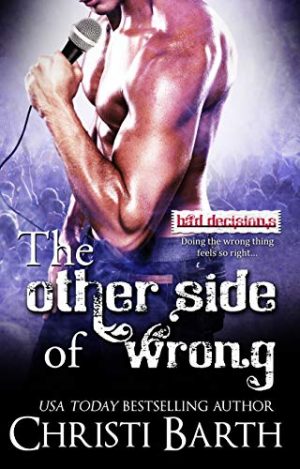 The Other Side of Wrong
Author: Christi Barth
Reviewer: Nima
Rating: C+

The Other Side of Wrong is billed as a stand-alone novella even though it fits into slot #3 in the Bad Decisions series by Christi Barth.  I have not read the books which proceeded this one and am not likely to after having finished this one in a quick afternoon.

In an effort to set up a world of glitz and glamor, main characters Cassidy—we don’t know her last name because she’s one of those one named mega-stars like Cher or Madonna—and Jake McQuinn, keyboardist for the fictional band Riptide, are initially presented much more shallow and manipulative than they turn out to be in the latter half of the story. At the outset, Cassidy is openly determined to manipulate Jake into a relationship with her.  She plans her approach from an offer he can’t refuse, right down to the outfit she wears.  Jake, is trying to please too many people rather than himself, but for all the lip service he gives to caring about people who are depending on him, he ultimately only has the dilemma of choosing between two ridiculously wealthy options.  Poor Jake. *cue the violins*

Cassidy’s ultra religious upbringing, which we later learn was Amish, feels like it was a disparagement of religion in general, not something specific to her parents and their interpretation of their faith.  While the characters espoused politically correct tolerance, that apparently doesn’t apply to anyone who might not approve of them.  As a result, I was slow to warm up to them in a book length that doesn’t have the luxury of a slow warm-up.  Additionally, as fun as it can be to escape into the world of money and fame, it’s equally annoying to see the people who inhabit that world behave in ways that dismiss the way most people go from day to day. They didn’t become sympathetic until minor characters who should have been trustworthy tried to take advantage of their status. Cassidy‘s sister Sarah was especially troubling.

Barth was often contradictory in her descriptions, making Jake long and sinewy, then ripped, and then broad and attributed all three descriptions to the athletic way he played his instrument.  Sorry, but that brings to mind images of John Goodman in the movie King Ralph rather than Deep Purple’s John Lord. When I think of really amazing keyboardists, I think more of the intensity of Ray Manzerek (The Doors) or Jordan Rudess (Dream Theater) neither of whom would be described as athletic.

Both characters do work through their issues with each other in and the supporting minor characters in surprisingly adult ways. I mostly liked them by the end and understood their motivations.  For a quick, escape length novella, it just wasn’t as much fun as I wanted it to be.

Jake McQuinn’s lived and loved the rock-star lifestyle. But a family scandal ripped him away from his band and back home. Back to boredom, a buttoned-up sham of a job, and a desperate need to whitewash his image. His family’s pharmaceutical company could crumble without him. His band’s epic comeback won’t happen without him. How’s he supposed to choose which one to save?

Cassidy–just one name as befits one of the biggest pop stars on the planet–has discovered the downside to fame. Finding a decent guy to date who understands her demanding career and crazy schedule? Impossible. Until she remembers the rocker who almost rocked her world a few years ago…

Jake thought he walked away from her for all the right reasons. Cassidy, however, intends to get him back. And she’s going to use his band’s shot at redemption and rock legend status as leverage. If she convinces him to date her again and drop the good guy routine? Even better. Doing the right thing for everyone else feels so wrong for Jake. And making a bad decision about hooking up with Cassidy could be the best thing yet…