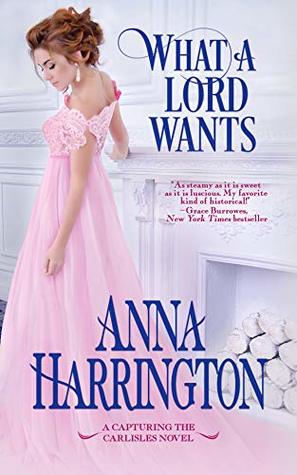 In the prologue we get a brief glimpse of the joyous, unhindered Dominick living in Italy as his alter ego, Domenico, perfecting his craft and falling in love. Fast forward ten years later and Dominick is living in London, now Marquess of Ellsworth, taking on unwanted responsibilities after the unexpected death of his brother two years prior. Now that he is the Lord, Dom must hide his true nature, but he hopes by creating his own masterpiece, he can come out to the world as a painter.

Eve, daughter of a wealthy businessman and sister-in-law to a duke’s family, feels trapped by the expectations and obligations of her station. So when the notorious painter Domenico mistakes her for his new model, Eve goes along with the charade. However, when the truth of her work is discovered, more is at stake than ruining her own reputation.

What a Lord Wants is a delightful romp filled with powerful emotions. I enjoyed reading every minute of it! Dom and Eve find within each other, the perfect soulmate. Even before either knows the other’s identity, the pair finds a kinship and are able to share joys and pains together. They grow and learn, apologize and celebrate – they feel. And even after they each discover the true identity of the other, they realize their bond is much more than artist and model. Their friendship and subsequent romance would not have happened had the truth been known from the start.

While the unfolding of events that brings the couple together, tears them apart, and finally back together is a bit predictable, what makes the story special is the genuine emotions poured into their actions and reactions. I was drawn to the pair from the start and loved watching their journey progress.

I really enjoyed What a Lord Wants, with all of its passion and emotions. Eve and Dom are meant to be together, and it takes nearly losing it all until Dom recognizes the truth of life and what truly makes him happy. I loved the focus on developing their relationship and creating/working through the tensions.

Dominick Mercer, Marquess of Ellsworth, leads a double life. In public, he’s one of the most respected peers in England. But in private, he’s notorious Italian painter Domenico Vincenzo, a man known as well for his scandalous lifestyle as his visionary paintings. He’s determined to paint a masterpiece and put his real name on it, thus freeing him from this dual existence that’s becoming difficult to maintain. The problem? His model is the most unusual woman he’s ever met and the only one fit for his masterpiece. And she’s keeping secrets of her own…

Eve Winslow is determined to live life to its fullest by bouncing from one madcap escapade to another. So when a misunderstanding brings her to Vincenzo’s studio, she simply cannot refuse the adventure of being his model, or his rakish charms. Soon Eve’s adventure turns into scandal, and the only person who can save her is the same man who causes her downfall—a man who refuses to put anything before his art, including love.