Posted March 7, 2019 by B. in Rating B, Reviews, Sci-Fi or Fantasy Fiction, Urban Fantasy Tags: Ace Publishing, Anne Bishop, Bs-review, The Others series, World of the Others series 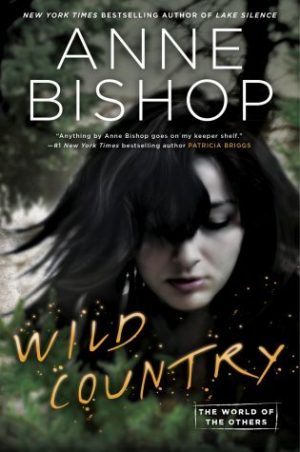 In a welcome, if somewhat startling, jump backwards from the first World of the Others story, Lake Silence, Anne Bishop returns her readers to Bennett, a town “cleansed” of humans by the Elders during the events of Marked in Flesh. Paralleling the timeline of Etched in Bone for much of the narrative, Wild Country is an ambitious new beginning for the people of the continent of Thaisia, and a cautionary tale for survivors on both sides of a conflict that sometimes feels eternal.

While I wish Wild Country had been released before Lake Silence, I was happy to find out the answers to so many questions that arose during the earlier novels. The story begins with a reintroduction to Jana Paniccia, the first female deputy, and follows her journey from before her previous mention to her new life in Bennett. Also returning are the residents of Prairie Gold, as well as a couple of favorites from Lakeside, which I was glad to see.

Whereas the Lakeside Others’ animosity towards humans was tempered and reshaped by their bafflement over Meg, the new order as evidenced in Wild Country isn’t nearly as lighthearted. Bennett is, ultimately, an experiment, and there are plenty of Others in and surrounding the town who are waiting for the justice its failure will bring. Of course, this test is comprised of both the predictable and the unexpected, the outcome resulting in even more uncertainty than the beginning. In fact, a quick search through my copy of Lake Silenceturned up no mention of Bennett—which I’m hoping is a fluke, rather than a warning.

The best thing about Wild Country for me was definitely the characters, whether familiar or not. Tolya Sanguinati and John Wolfgard were favorites of mine from before, along with Rachel Wolfgard, Jesse and Tobias Walker, and Barb Debany. There were also plenty of new characters that I liked instantly, including Virgil and Kane; Joshua and Saul; Becky; Evan, Kenneth, and their kids; and, most especially, Scythe and the denizens of the Bird Cage Saloon.

Although I enjoyed these and other parts of Wild Country, I had some trouble with several aspects of the story. The rapid acceptance of human law in the new version of Bennett didn’t feel right (especially after the harsh lessons learned in the war and “Great Predation”), and seemed doomed as an experiment from early on. I’m also still not sure what the author intended with much of Dina’s storyline, and found it to be rather imbalanced as a parable. Other things—an inconsistency regarding the requests for the elementals’ aid, Judd’s quick turnaround at the end, etc.—left me scratching my head quite a bit, too.

Overall, I had mixed feelings about Wild Country. On the one hand, I was happy to return to familiar territory and I enjoyed the temporal connection to the earlier stories. There were also plenty of characters that I liked tremendously. On the other, however, I got the feeling that a lot of the pieces of this new puzzle didn’t fit quite right, but had to do for the sake of the continuation of the series. And I sincerely hope that there are more novels to come. This may be a darker, more precarious world, but I very much want to know where the future will lead.

There are ghost towns in the world—places where the humans were annihilated in retaliation for the slaughter of the shape-shifting Others.

One of those places is Bennett, a town at the northern end of the Elder Hills—a town surrounded by the wild country. Now efforts are being made to resettle Bennett as a community where humans and Others live and work together. A young female police officer has been hired as the deputy to a Wolfgard sheriff. A deadly type of Other wants to run a human-style saloon. And a couple with four foster children—one of whom is a blood prophet—hope to find acceptance and safety.

But as they reopen the stores and the professional offices and start to make lives for themselves, the town of Bennett attracts the attention of other humans looking for profit. And the arrival of the Blackstone Clan, outlaws and gamblers all, will uncover secrets…or bury them.