Posted March 31, 2019 by Jen in Sunday Snippet Tags: ever after series, Linda Poitevin 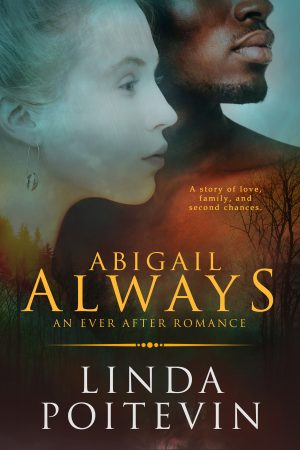 “Abby? Abby, wake up. There’s a dog at the door, and Kiana wants to let him in.”

Abby struggled up from the cottony softness of her duvet and sleep. She blinked at Brittany’s face, illuminated by the glow of the digital clock on the bedside table. Then she blinked at the fact it was still dark enough for the clock to illuminate anything. Then at the clock itself.

“It’s three in the morning,” she mumbled. “What are you doing out of bed?”

“There’s a dog,” Brittany repeated patiently. “At the door. Kiana heard it crying, and she woke me, and now she’s sitting on the porch with it because I told her it couldn’t come into the house.”

“She’s on the porch in her pajamas?” Abby gaped at the girl, then fought to untangle herself from the covers. “It’s freezing out there!”

“I know. That’s why I woke you. She says she won’t come in without the dog, but it’s really big and dirty, and I told her it had to stay outside.”

A big, dirty, unknown dog alone on the porch with a five-year-old while the rest of the world slept. Abby almost fell over in her haste to get to the door because, yeah, there was no way this scenario could go wrong. She raced down the stairs, flicked on the porch light, and tore open the door. “Kiana? Kiana, sweetie, you need to come into the—” She stopped and swallowed. Hard. Brittany hadn’t been kidding about big.

A massive black head lifted off Kiana’s lap and turned to regard Abby. Snow coated the animal’s back, and he—she?—shivered sporadically. As did Kiana, whose teeth clacked together. Abby moved toward the girl but stopped again when a low growl rumbled across the porch. Her throat squeezed tight. Please, please, please don’t hurt her, she silently urged the watchful animal. Please.

She made herself take a calming breath. “Kiana? I need you to come over here with me, sweetheart. Slowly, so you don’t startle him, okay? We don’t want him to get scared and bite you.”

“Don’t w-w-worry,” the little girl said, patting the dog’s head as she shivered. “He won’t hurt me. He’s m-m-my friend.”

“We don’t know that for sure.” Abby tried hard to keep the panic from her voice, all too aware of the dog’s suspicious brown gaze fixed on her. “He could be sick or hurt, and he might bite you by accident.”

A hairy black lip lifted away from strong white teeth, as if to underscore the imminent threat, and Abby’s knees sagged a little. She clutched the doorframe. Not taking her eyes from the duo on the porch, she said over her shoulder, “Britt, go wake your dad and tell him we need him, okay? Tell him it’s import—”

“Daddy’s not home. That’s why I woke you. Should I call the police?”

Sh*t. Abby bit her lip, swallowing the curse just in time. Thoughts jumbled through her brain. The police might be a good idea. Who else was she going to call at three in the morning to remove a potentially rabid animal from the front porch? Three in the morning. Where in God’s name was Mitch at three in the morning? He’d gone out again after putting the girls to bed, but he couldn’t possibly still be working at this hour, could he? Which begged the question of what else he could be doing, and none of those questions helped—at all—with the current problem of a potentially rabid animal on the front porch.

Abby pushed a strand of hair out of her eyes. One more attempt to talk Kiana inside, she told herself. If that didn’t work, she’d have no choice but to call for help. She schooled herself to calmness again.

She broke off as Kiana’s arms stole around the big dog’s neck, wrapping it in a hug and earning herself a small, wet kiss on the cheek in return. Two sets of brown eyes turned to Abby, managing to look sad and hopeful all at the same time.

“P-please can he c-c-come in?” Kiana asked. “He’ll die outside by himself.”

For the first time, Abby wavered. Her priority was getting Kiana into the house and warm again, and to her, the animal looked strong enough to withstand the cold for a few more hours, but what if she was wrong? What if he’d already been out in the cold for days, and their porch was his last resort? What if, heaven forbid, Kiana was right, and they woke in the morning to an enormous black carcass in front of the door?

She and the dog shivered again, and a low, pleading whine reached Abby’s ears. She caved.

“Fine,” she said, “but only for tonight, and he stays in the laundry room.”

“Yay!” Kiana got stiffly to her feet and tugged on the dog’s matted fur. “Come on, dog. I’m freezing.”

For a giant hairy monster, Kiana’s new friend proved remarkably cooperative about being confined in the laundry/mud room. After turning around a half dozen times on the blanket Abby put down for him, he collapsed with a long half sigh, half moan, and curled into a tight ball. Abby was pretty sure he was asleep before she closed the door, much the way she herself wished she could be, but first she had to see to the half-frozen and wide-awake Kiana. It took two blankets, a mug of hot cocoa, and twenty minutes of lap time before the five-year-old stopped shivering and starting yawning, and another twenty minutes to get her and her sister back into their beds.

By the time Abby dragged herself back to her own room, it was past 4:00 a.m. and there was still no sign of Mitch. So, of course, that meant another hour or so of lying in bed waiting for the sound of the garage door and wondering if she should call him to make sure he was all right.

Except if he’d been out all night, then he was very likely with someone. And a phone call from the nanny checking up on him would be uncomfortable all round. Not to mention that it was none of her business, because whatever that shared moment had been the night before, she had no right to wonder about his private life—and no right to be sharing moments, either. Or any interest in doing so, she reminded herself.

A last glance at the clock marked the time at 5:10 when she finally turned over and drifted off to sleep, only to be jolted awake again by an unholy commotion. For the second time, she bolted from her bed and ran down the stairs, her feet landing on the main floor before she was even awake enough to identify the racket as a dog snarling—and a man bellowing. Wincing, she hurried to the laundry room and opened the door to find Mitch clinging to one end of a baseball bat and their overnight guest to the other, locked in a tug of war and hurling insults at one another through the partially open door to the garage.

Still grieving the loss of her husband and young daughter, Abigail Jamieson is struggling to carve out a new life on her own.  With no work experience and few marketable skills, Abby falls back on the one thing she knows how to do well–run a household.

Agreeing to be a nanny for an attractive and dedicated single dad, however, turns out to be more than Abby bargained for.  Mitch Abrams, a widower himself, can barely keep his head above water while raising three daughters who challenge him at every turn.  Sympathetic to his desperation, Abby signs on for a three-month stint to get Mitch’s house and family in order, but she soon finds the entire Abrams family stirring a warmth in her she thought she’d never feel again.

It’s clear that the girls and Mitch all want her in their lives, but can Abby let go of the pain of her own loss and give herself another chance at love and family?