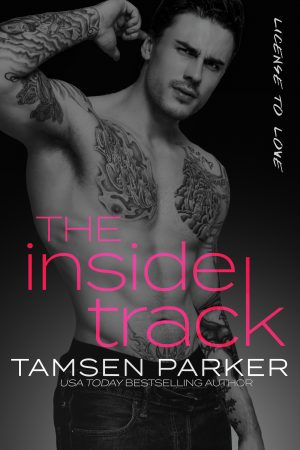 “I have a treat for you guys tonight.”

A roar goes up in the crowd, because who doesn’t like treats?

“You get to meet someone pretty special to me.” Even under the bright stadium lights beating down on us, I feel my cheeks heat. I may look like a tough guy with my tats, but I’m such a softie. And I’ve got a particular soft spot for this redhead.

I talked to my roadies about this before the show and we tested it, and it should all go according to plan. But still my chest is tight while I dial and wait for Dempsey to pick up.

“Nicky. Hey. Thought I wouldn’t be hearing from you until late tonight, aren’t you playing a show?”

I have to plug an ear to listen to her, because it’s really f*cking loud here, and she notices it, too.

“Are you…are you still at the show? It’s so loud.”

“Um, yeah. I wanted to introduce you to some people. You’re not, like, naked or anything, are you?”

She laughs, and so does the crowd. And of course, there are some catcalls, too. I thought this would go off flawlessly, why?

“No, I took a shower this afternoon after Wash was here so I’ve been dressed for a while. Why?”

“Go into your office and turn on your video chat. I told you, I want to introduce you to some folks.” Twenty thousand of my closest friends. I give Jimmy a signal and there’s a beat, but then there’s Dempsey, all wavy red hair and dark brown eyes, wearing a bright yellow cardigan and a grey T-shirt. Her face is several stories high. And if this has worked right…

She covers her mouth, and her eyes get huge, and she scans what’s hopefully a big ol’ shot of the stadium.

“Everyone, say hi to Dempsey.”

Obediently, the tens of thousands of people in the stadium chime in: “Hi, Dempsey!”

“Dempsey, say hi to everyone.”

She laughs into her palm but then uncovers her mouth and smiles as big as I’ve ever seen her and waves. “Hi, everyone!”

They cheer, and then I strum a chord on my guitar.

“So, Dempsey and I have been hanging out lately.”

Another chord, another cheer, and Dempsey’s face gets about as red as her hair.

Man, I should always ask girls to be my girlfriend on a gigantic screen. This is awesome. And if she turns me down, I have twenty thousand people to make me feel better about it.

“You can see she’s real pretty. But she’s also smart, like way smarter than me, and she’s a really good cook. Plus, she’s super-organized and she’s amazing at her job. She helps people and keeps them safe. Basically she’s a superhero, but with spreadsheets. And she’s funny, too. And a good kisser. Like, real good.”

“Nick,” she says in a half-joking, half-warning kind of way.

“Anyway, we’ve been hanging out and we like each other, and neither of us are shy, but we haven’t quite figured out…”

I play another few chords, and I f*cking hope someone’s taking notes because this could be a song. I’m writing Dempsey a love letter in real time and playing half of it on my guitar. It’s messy, but she doesn’t seem to mind that. About me, anyway.

“Well, maybe it’s just me. I haven’t figured out a way to tell her that I like her a lot, and I want her to be my girlfriend.”

The crowd goes absolutely wild, and Dempsey buries her face in both her hands, shaking her head so that her hair sways.

“What do you think, New York? Should Dempsey be my girlfriend?”

There are a bunch of shouts of yes, and a few random dickwads yell no. But then Benji’s taking up his mic and starts up a rhythmic cheer of “Yes, yes, yes, yes.” The guys like Demps a lot, even though they’re still scratching their heads over why she doesn’t come meet up with us while we’re on tour. I haven’t exactly told them why not yet, just that she doesn’t travel. Which is true.

No time to think about that now, though, because the people in the stadium catch on to Benji’s cheer and add stomps and claps, and soon everyone is chanting in time.

But the far more important part is still up in the air.

“And, Dempsey… Nah, babe, don’t cover your eyes.” She looks into the screen, and I press a couple of buttons on my phone, looking at the cheat sheet I wrote on the back of my hand with Sharpie. And there we are, a split screen. She can’t see the stadium anymore, but I’m sure she can hear it, maybe even feel it because the place is shaking on its foundations. “Demps, will you be my girl?”

Love might mean coming as you are, but staying is a different matter.

Nick Fischer is a screw-up; everyone knows it and they’re not afraid to tell him so. The only thing he’s got going for him is that he plays a reliable rhythm guitar for License to Game, and his big fat bulldog, Princess Fiona, is so ugly she’s cute.

Dempsey Lawrence is a former child star turned financial advisor, and while she’s curious about the hot mess of a man who’s her co-panelist for a presentation on financial literacy, she has no intention of pursuing anything with him. Too loud, too crass, too wild, Nick is altogether too much. Plus, he’s famous, and she is so over stardom and everything that comes with it.

Except that when Dempsey gives Nick an inch, he takes a mile, and she finds that she doesn’t mind so much. Until Nick brings the pitfalls of stardom to Dempsey’s doorstep, then all the attraction in the world might not be enough to promise a happily ever after.