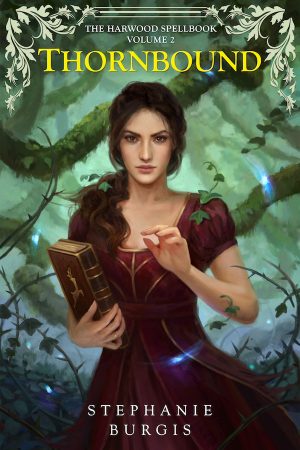 I’d planned to begin with a stirring five-minute lecture that would have lit a fire in any young woman magician—but it would have outraged any member of the Boudiccate. So, with my critical new audience members in mind, I regretfully crossed out that plan over a hasty private breakfast.

As I’d told Wrexham only a few hours ago, there was no point in handing the Boudiccate any gift-wrapped excuses to be rid of us. But it was with a sense of vengeful satisfaction that I decided to begin my first class, instead, with a simple demonstration of every politically inconvenient truth that I had planned to blast out in that original speech.

“Miss Hammersley,” I said as my students took their whispering, giggling places in Thornfell’s back parlor. The air jangled with their gathered excitement and nerves, a chaotic, nearly tangible force that sent goosebumps skittering across my skin. “Would you please join me at the front of the room?”

Miss Hammersley gulped, while the other eight students rustled with interest. The Boudiccate’s inspection team sat in the back corner, and Annabel Renwick raised one expressive eyebrow as she pointedly looked my most impoverished student up and down, from her plainly dressed red hair to the hem of her faded and much-mended dark blue gown.

As Miss Banks had told Wrexham, Miss Hammersley—one of my two students without an alibi for last night’s mischief—hadn’t had the opportunity to raid any libraries of magic in her own home. She’d grown up in a practical farming family with hardly any access to spells, so she had none of the cultural or magical experience so prized amongst the fashionable young gentlemen who arrived at the Great Library after years of preparation.

…Which served my purposes today exactly.

“Miss Harwood.” Her pale green eyes were wide with what looked like panic, but her low voice was firm and beautifully resonant. She raised her strong, freckled chin high as she stood before me and clasped her hands together under the gazes of her classmates and our inspectors.

Brave girl. I gave her a small, approving nod.

It had taken courage to apply to my school by letter, too, as the first magician in her family, with no one to vouch for her suitability. Of course she couldn’t pay the fee that Amy and I had settled on as both appropriate and impressive to families used to the Great Library’s charges—but the passion and fierce intelligence in her letter had won her a place before I’d even finished reading it.

I was married to a former scholarship student. I knew exactly how little that web of aristocratic social connections really mattered when it came to a magician’s true abilities—and exactly what it felt like to thirst for magic without an outlet.

“I’d like to perform an experiment,” I said. “Miss Hammersley, would you please take up one of the textbooks from this table?” I gestured at the polished oak side table behind me, which was stacked with books of varying sizes.

She hesitated with one freckled and calloused hand hovering above the pile. “Does it matter which one I choose?”

She bit her lip, then nodded decisively and scooped up a slim volume from the middle of the table.

“An excellent choice.” I took it from her and held it up for the rest of the class to see. “This is Aguirre’s Elements of Spellcraft—a book traditionally studied in the third year at the Great Library.” Smiling, I passed it back to Miss Hammersley. “Why don’t you open it to page fifty?”

Her throat moved with her swallow, but she did as I’d asked.

For the first time, she balked. “Miss Harwood…” She took a deep breath, lowering her voice to a pained whisper. “I don’t know any of these words.”

“You don’t need to…yet.” I put one hand on her shoulder, ignoring our audience to firmly hold her gaze. “Trust me. I don’t care about pronunciation or meaning. All I want you to focus on as you speak is your will.”

“My…will?” She frowned as the other students leaned in, listening intently.

“Your will,” I repeated firmly. “You have a strong will, Miss Hammersley. You all do, every one of you.” I looked across my class, taking the time to meet each gaze in turn: nine young women of different heights, skin colors, fashions, and ages, all united in one room and one radical endeavor. “You wouldn’t be brave enough to be here in Angland’s first class of women magicians if you didn’t.”

I turned back to Miss Hammersley. “So don’t allow yourself to worry about anything else. Right now, I want you to hold just one thing in your head: how desperately you want to be a magician…

“More than anything in the world.” Her voice was ragged with emotion. A sigh of empathy rippled through her classmates as she spoke, all of them leaning even closer.

“Then hold that in your head. Don’t even think about the words or what they might mean. Just think about what this means to you, now: standing here, beginning your training amongst your peers.” I gestured to the eight young women around us. “By the end of your four years here, I can promise you that the nine of you will have formed a bond that will be nigh-on unbreakable. And when women work together…” I let my gaze drift to the watching Boudiccate inspectors. My smile turned rueful as I nodded discreetly to them. “We all know what national wonders they can work.”

And Miss Hammersley’s voice rolled through the room, firmly and clearly reading every word of the spell—with the full force of her impressive willpower behind it.

That was exactly what she needed.

Glorious, celebratory bells suddenly rang through the air, sending students and inspectors jumping in their seats. The invisible bells chimed rich and resonant around us, so loud and overwhelming that they almost drowned out the cries of surprise and laughter and delight that sounded throughout the whole class in response…

And tears of pride sprang to my eyes, mirroring the sparkling drops that rolled down Miss Hammersley’s freckled cheeks as her own glorious and strong magic sang out in those bells, filling the room with music and power.

She read the entire spell from beginning to end without faltering even once.

“And that,” I said, as the final echoes faded into a wonderstruck hush, “is what I want every one of you to remember over your next four years here. We will work on the intricacies of control. You will struggle to master every complexity that our vocation has to offer. You will memorize more finicky details than you can yet imagine…but at its essence? This is what magic requires, more than anything else: pure willpower and determination.

“And I know that every single one of you is capable of it.”