Note: The narration for all titles is reviewed at the end of the story reviews. 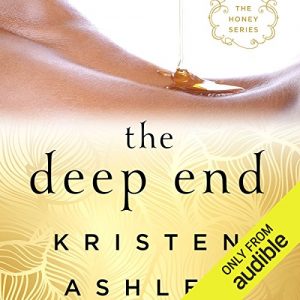 After so many others recommending Kristen Ashley to me, I finally decided to give her a go with her Honey series.

I’ve been on a D/s reading kick lately so The Deep End worked into my reading schedule at a perfect time. This is the 2nd title I’ve read where the heroine is the Domme and the hero is the submissive, and I find it funny that the first title I read was Natural Law by Joey W. Hill was referenced in this novel. It’s the book Amèlie’s book club of Dommes was reading.

I’ve seen where Ashley fans aren’t jumping for joy she wrote in this subgenre of romance, but I have to say she wrote it well, and I welcome more of it on my TBR! Granted D/s, erotica, or whatever you want to label it is not for everyone, but fans of D/s romances will want to give The Deep End a read. I highly enjoyed the plot, characters, and romance from beginning to end. I can’t wait for the second book, The Farthest Edge and if it’s available on audio with the same narrator I’ll be listening to it. 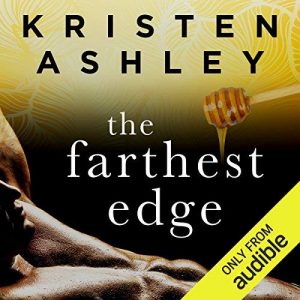 After loving The Deep End, I couldn’t wait to listen to more in Honey series by Kristen Ashley. Lizbeth Gwynn brought all the sexy and emotions with her narration of The Farthest Edge. Great author/narrator pairing!

Hot alpha sub, which is a new term to me. I often wondered if I could get behind a male who submits to a female in the bedroom. I have read a few others but didn’t read the term alpha sub and now I love the term because it describes men like Branch to a T. They are the guys who are alphas in IRL (in the books they are in lol), but wants a strong woman (Domme) to rule over them in the bedroom. They get their pleasure from submitting to their woman. It’s really hot!

Now that I’ve added ALL Kristen Ashley backlist to my TBR. I need your help in deciding which series to start next. If you have read her please place your vote for your favorite series in the comments.

Another first for me, listening to Lizbeth Gwynn. I looked her up to see what other titles she’s narrated but do could not find any. I have a hard time believing that The Deep End is the first title she voiced. She sounded like a narrator pro so there may be a chance she works under another name. It took me a about an hour to get into Gwynn’s performance and once she clicked with me I was an huge fan. She really brought the characters to life. She is one of those female narrators who has a deep voice that lends to great male voices as well as female. Gwynn’s delivered a sexy performance for a sexy romance. After Gwynn grew on me knew I would continue the series in audio and will look for more books narrated by Gwynn in the future.

My Rating:
Narration: B+

The Deep End:
Enter a decadent sensual world where gorgeous alpha males are pleasure slaves committed to fulfilling a woman’s every desire. At the elite Honey club, no boundary will be left untested, and one’s darkest desires will become a sensual reality.
Olivier isn’t sure what he’s gotten himself into when he joins the Honey Club, only that a dark part of him craves the lifestyle offered by this secret, exclusive club.

When Amèlie invites Olivier to surrender, she pushes him to explore his deepest desires as a submissive. As they grow closer and find themselves falling harder than either of them anticipated, the truth about Olivier’s past could threaten the budding relationship they both long for.

The Farthest Edge:
A man without a past. A woman who lost her future. Together they’ll push each other to the farthest edge and ignite a passion that’s harder and deeper than they ever imagined. But is it strong enough to turn into something real and lasting? In the second highly anticipated book in the Honey series, New York Times bestselling author Kristen Ashley once again delivers a smoldering hot story that is achingly romantic and populated with intensely raw characters that will stay with you long after you turn the final page.