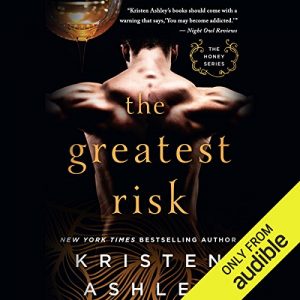 The Greatest Risk is a romance about two people who have a chemistry that quickly turns into love, but Sixx’s past keeps her from believing she is worthy of anyone’s love much less a man like Stellan.

Sixx works through some very dark issues from her childhood and the death of her parents and the lives they lead when they were alive. Sixx agrees to give Stellan a month to see if they could make a D/s relationship work between them. Stellan is hoping for a forever at the end of the month and Sixx is hoping she can make it out of the month with her heart and not distorting Stellan.

After Stellan breaks down Sixx’s walls (with help from friends), Sixx realizes she can be Simone (her real name). Sixx is a persona she developed at the age of six to help her cope with her life. Sixx is all the hard angles of Simone. Stellan helps her realize she is both Sixx and Simone and he wouldn’t have her any other way.

“We’re not two halves that make a whole. We’re two souls who share a vital understanding.”

The Greatest Risk is a deeply emotional ride with many stops to enjoy the smexiness of Stellan and Simone.

I don’t know how many ways I can say that Lizbeth Gwyn rocks the narration for this series so I’ll simply say I’m still loving the narration. There are some secondary characters I hope get their own stories. I’ll be stalking audible for new audiobooks in the Honey series.

My Ratings:
Story: A
Narration: B+ 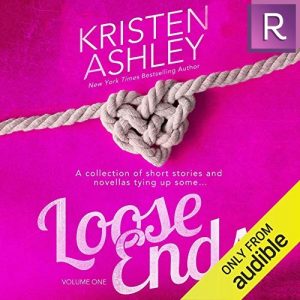 After meeting Diesel, Molly and Maddox in  The Deep End  I hoped they would get their own story because Diesel was in a bad way when we left them at the end of Sixx and Stellan’s story. I was looking around Audible’s Romance Package and found Loose Ends, a collection of short stories and novellas by Kristen Ashley. That’s where I found the trio had their own story in More Than Everything.

More Than Everything is told through three POVs, mostly Diesel and Maddock with a little from Molly. It makes sense the story is told through the “boys” POVs because that’s where the hitch in their HEA was happening. They all love each other but because of Diesel’s family (dad, mom, and older brother) and the small town he grew up in, he has a hard time with is bisexual side. He loves Maddox just as much as Molly, but he wouldn’t give Mad his soft side when they made love as he did with Molly. He wouldn’t kiss Mad, and it was starting to affect the relationship.

More Than Everything is about the trio working on the issue with D and getting him to a place where he finally understood Mad and Molly where both his and he was theirs and it didn’t matter if his bigoted family (with the exception of his little sister) understood their love.  While the story was super HOT with M/M, M/F, M/F/M, M/M/F loving it’s moving and emotional with the struggle they go through to get to that final HEA all three of them deserve.

More Than Everything was narrated by three narrators. Lance Greenfield (Diesel), Alexander Cendese (Maddox) and Sarah McEwan (Molly). They all delivered good performances but I missed Lizbeth Gwyn. I’ve listened to both Lance (Misadventures of a City Girl by Meredith Wild and Chelle Bliss) and Alexander (Body Armor series by Lori Foster) but Sarah was new to me. I would say between the two male narrators Lance was my favorite (very deep sexy voice) but they both delivered good performances for their characters. Sarah was a joy to listen to as well.

My Ratings:
Story: A+
Narration: B

The Greatest Risk:
A woman unable to connect, struggling to hide another part of her. A man burning to learn her truth, and make her whole. Through explosive passion and deep exploration, they are about to take the greatest risk of all. But will they be able to take that leap, and come out on the other side together?

More Than Everything (from Loose Ends):
Listeners left Diesel, Maddox and Molly at a crossroads at the end of The Greatest Risk of the Honey series. Maddox and Molly were all in with their commitment to their unconventional love triangle. But Diesel was letting the pressures and prejudice of family and society sink under his skin, making him hold himself distant from the man he loved. Can Maddox and Molly lead Diesel fully into their lives and give him more than everything?