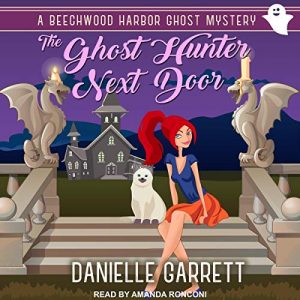 Scarlet has been able to see and communicate with ghosts since her 8th birthday when her deceased cat, Flapjack, made his first appearance. Now she and her constant companions talking cat, Flapjack, and British gent, Hayward, reside in Beechwood Harbor, a community filled with supernaturals. Ghosts are drawn to Scarlet, and she finds a way to help them cope and deal with death and those still living. However, things change when a violent ghost named Rosie demands Scarlet stop a reality TV crew from renovating the Lilac House. Rosie has abilities beyond any Scarlet has seen, and Rosie intends to use them to hurt the humans invading “her” home.

Many of the characters are, in fact, ghosts, including Gwen from the original series. Additionally, we meet Lucas, the hunky head of the show’s security. For some reason, Scarlet feels a bond with Lucas, allowing her to share her secrets with him. And for once in her life, someone believes her and believes in her. I like that Scarlet has a confidant to help her solve the mystery, but more importantly, give her a much-needed close friend (and love interest). In the beginning, there was a slight suggestion of a potential love triangle with a local police officer, but it wasn’t pursued at any length in this book, thankfully.

The mystery of who Rosie is and why she is such an angry ghost morphs into a pretty good murder mystery. I had fun trying to figure it all out as Scarlet and Lucas dig into the past. I really enjoyed the conclusion, especially how Scarlet gives Rosie the gift of peace.

I’ve been listening to Amanda Ronconi read the original series for a half dozen books now, and she has consistently done a wonderful job. This time around, the book is voiced from the first person POV of Scarlet, who has a different personality than Holly (original series heroine). Ms. Ronconi changes a little here and there to convincingly portray a new main character. Additionally, the three primary ghost regulars have distinct voices. While there is little difference between the each of the male characters’ voices, the tone is deeper and fitting.

In the end, The Ghost Hunter Next Door is a solid kickoff for this new series. The story is both interesting and sweet. I like that Scarlet has someone she trusts and can confide in, and I love the blossoming romance between her and Lucas.

My Ratings
Story: B+
Narration: A-/B+

The first rule of being a ghost whisperer: Don’t tell anyone.

Sure, it might sound harmless. A fun party trick, even. I assure you, it’s not.

How do I know? Well, let’s just say that I’ve had a lot of experience with this sort of thing, and nine times out of ten, it turns into an all-consuming disaster.

Being plagued by needy ghosts twenty-four/seven is one thing; being harassed by a horde of curious — or worse, grieving — flesh-and-blood people is an entirely different circus. I mean really, who wants to hold an impromptu séance in the middle of the cereal aisle? Not me, and the manager of the grocery store probably isn’t too crazy about the idea, either.

So, that’s it. If you’re a ghost whisperer, just keep your mouth shut and act normal. Ghosts? What ghosts?

Now, if only I would start listening to my own advice …