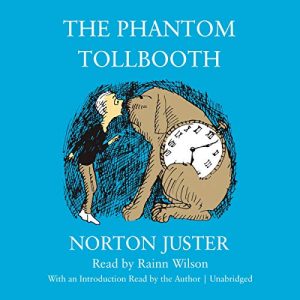 The Phantom Tollbooth was one of my top five favorite books when I was in elementary school. I still have my original, tattered copy, and I read it to my kids when they were in elementary school. So, when I received notice that a new audiobook version, read by Rainn Wilson, was coming out, I jumped at the chance to review it!

For those unfamiliar, The Phantom Tollbooth shares the wonderful adventure of Milo, a bored young boy who finds himself transported to a magic land where words and numbers come to life. He befriends a ticking watch dog named Tock, and together they set off to bring back Rhyme and Reason to the land. In the vein of books like Narnia and and A Wrinkle in Time, our adventuresome hero learns much about himself while saving a world outside our own.

This newly minted audiobook edition of The Phantom Tollbooth is amazing. Right from the start, with an audio introduction from Norton Juster himself, I was drawn into the tale. I didn’t know anything about the author prior to this, and I loved hearing him explain how this book came to be. In addition, the book didn’t feel dated – sure there are a few references to things like a phonograph that younger generations may not know, but by and large, the story is timeless. It’s a story of imagination for the younger listeners, and it grows into a witty, smart adventure for older listeners.

I was worried the puns and double entendres wouldn’t play off well in audiobook format, but I think I heard more of the word-play via listening than when I read the book. Sometimes it’s the narration: for example, Mr. Wilson puts a slight emphasis on “wh” in “which” as not to confuse listeners with “witch.” At other times, I think since we spend so much of our time communicating orally, that the cleverness is more clear when hearing the words.

Narration: Having loved Rainn Wilson from The Office TV show, I am happy to report that I didn’t hear Dwight at all! He captures Milo’s boredom, and then his enthusiasm when his interest is piqued. Mr. Wilson alters his voice for each character, giving each a unique and appropriate voice. He is able to capture the youthful adventurer, while bringing life to the words.

The Phantom Tollbooth is just what we all need. It’s a wonderful journey into imagination. Although written over 50+ years ago, it remains appropriate for today’s society. Milo is too busy to look at the wonders around him, so much like people today, with faces in cell phones and computers, we sometimes forget to look at the wonders around us. The Phantom Tollbooth puts the spotlight on the everyday, showing us how the ordinary is actually extraordinary.

For Milo, everything’s a bore. When a tollbooth mysteriously appears in his room, he drives through only because he’s got nothing better to do. But on the other side, things seem different. Milo visits the Island of Conclusions (you get there by jumping), learns about time from a ticking watchdog named Tock, and even embarks on a quest to rescue Rhyme and Reason. Somewhere along the way, Milo realizes something astonishing. Life is far from dull. In fact, it’s exciting beyond his wildest dreams!