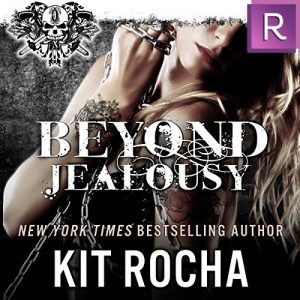 I have been waiting to listen to Beyond Jealousy in the Beyond series ever since the first book. The team of Kit Rocha has been teasing us with an HEA for Ace, Rachel, and Cruz.  I have to be honest, I was only into the romance and sex between the three. The action plot about the bootlegging and what the other characters were doing was all white noise for me. Not that the story wasn’t good, but all I cared about was the trio and how they were going to make their relationship work.

Ace was running scared for the whole story. He didn’t think he was good enough for Rachel and/or Cruz. Cruz thought he was the third wheel and Rachel also thought she was becoming between Ace and Cruz. It took a long time for these lovers to realize they all had something to bring to the relationship and that they all loved each other. 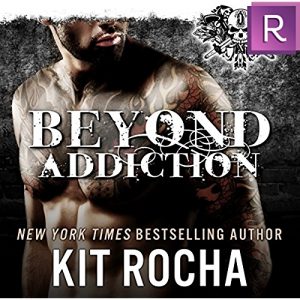 I was more into the story and romance with Beyond Addiction.  Trix and Finn have a past in a different sector. One where Trix went by her real name, Tracy.

Finn thought Tracy died a few years ago so he was surprised to see her tied to a chair in his boss’s office. He knew then and there that he would do anything to save her.

Trix and Finn escape from Sector Five with the help of a few new and old friends. They make it to Section Four and the O’Kane gang welcomes Trix back home but Finn has to take a few knocks before he gets the full welcome wagon from the O’Kane family.

Finn has heard the rumors about the O’Kanes and their parties. Seeing it first hand though was more than the rumors stated. Finn and Trix “party” with Dallas and Lex on that famous sofa.

My Rating:
Story: B 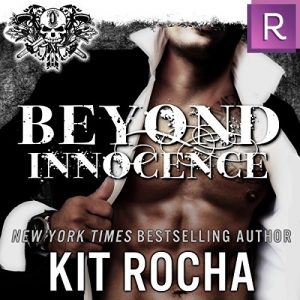 I said earlier that I was into Beyond Jealousy for the romance and Beyond Addiction moved the series plot along. Beyond Innocence had both key elements. I was invested in the romance and all the plot advancements. I also enjoyed the building toward the next couples for the next books in the series.

I’ve been listening to the Beyond series in threes and I think it’s the best way to experience the series because the characters’ stories generally carry over three books. You get a peek of them in the previous book, then get their full story and they are still around in the next couple’s book. All the characters are connected through friendship and/or sexual chemistry, but the connections are grounded within the sets of three books at a time. In these three books, we get Rachel, Cruz, and Ace, who is connected to Jared and they all play a part in Lili’s opening up to her sexuality. We get a peek at Lili in Finn and Trix’s book.

The war between Eden and the sectors is heating up to match the heat between the characters. I image the last three full novels of the series will work hard on wrapping up the series story arc while still providing some sexy times and romances. I look forward to listening to the last three books in the Beyond series soon. Look for my part 3 review of the series in the next coming months. In the meantime start the series for yourself.

Lucy Malone continues to do a stellar job with the narration. Her voice is sexy for the love scenes and gritty enough to pull off the male voices. She puts the characters’ emotions into her delivery. She has continuity of the characters’ voices from book to book. If a character has an accent or and way of speaking she keeps that up when they have a minor role in someone else’s story. I really like that about Malone with the Beyond series.

My Rating:
Narration: A-

She’s been looking for the perfect man. She found two.

When Rachel Riley sacrificed a life in Eden to protect the O’Kanes, she earned her place in the powerful Sector Four gang. But the former crime princess is tired of being everyone’s sweet little sister . It’s time for her to get wild, to embrace her fantasies as only an O’Kane can—with a delicious exiled soldier and the gang’s wickedly sinful tattoo artist.

Lorenzo Cruz is a warrior, taught by his commanding officers in Eden that involvement equals distraction. Emotion is a liability, and desire a sin. In Sector Four, he finds decadence, shameless sex—and his own dark urges. No battle strategy prepared him for how Rachel makes his heart race…or the way his rival for her affections sets his blood on fire.

Ace Santana has a dirty reputation and a mind to match, especially where his new lovers are concerned. He’s eager to help Cruz embrace his dominant side, and to explore the lines between pleasure and pain with Rachel. But corrupting them quickly becomes an obsession, a need he can’t deny—and a love he never imagined.

Three hearts on the line means a hundred ways their ménage a trois could go wrong. After all, even O’Kanes do forever two-by-two. One of them could be the missing piece that makes them all whole…or a temporary diversion destined for a broken heart.

She’s fought like hell to leave the past behind.

Trix changed her name and her life when she got clean four years ago. Now, she has a new family and a job she loves—tending bar and dancing at the Broken Circle. As an O’Kane, she’s happy, untouchable. Until a nightmare from her old life tears her away from her home and drags her back to Hell—also known as Sector Five.

Losing Trix was the kick in the head Finn needed to get sober, but working as an enforcer for a man he hates is slowly crushing his soul. The only thing that keeps him going is his determination to destroy Sector Five from the inside. Then Trix comes back into his life—alive, in danger—and nothing else matters.

Getting her home could be a suicide mission. The only thing deadlier is the old spark that flares to life between them. Soon, Finn and Trix are battling the one addiction neither of them ever managed to kick—each other. And it could cost them everything.

For years, Jared has existed on the fringes of both Eden society and Dallas O’Kane’s Sector Four gang. He travels between these worlds, protected by his money and power–money he earned selling his body, and power that comes from knowing secrets. He’s untouchable—until he starts a new life gathering intelligence for the O’Kanes.

Lili Fleming walked out of Sector Five with a gun, the bloodstained clothes on her back, and an icy determination to survive. She finds herself in a world where people live hard and love harder, and nothing’s more terrifying than how much the O’Kanes wake her up, make her feel—especially Jared.

Emotion is a risk he can’t afford, and a complication she doesn’t need. But neither can resist the lust simmering between them, and the sparks that could either melt the ice around both their hearts…or get them killed. Because the only thing more dangerous than loving an O’Kane is loving a spy.