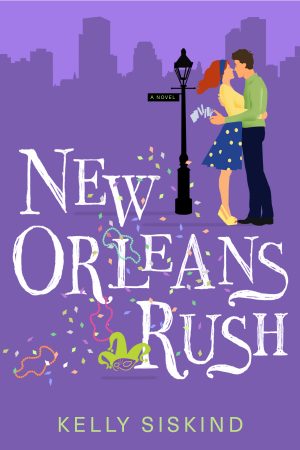 Bea has had a horrible 13 hours. After moving from Chicago to New Orleans with her boyfriend four days ago, he dumped her and sent her packing. Following an evening of drinking her sorrows away, Bea spies her ex-boyfriend’s precious car, and just like Carrie Underwood, Bea decides to key it up. However, it’s not his car, it belongs to Huxley, a struggling magician. He offers to let Bea work off the damage by being his assistant.

Something inside Bea comes to life the moment she meets Huxley. He’s not your typical romance hero. A cape-wearing magician, Huxley is scarred; “puckered skin overtook half an eyebrow, part of his right ear was missing, and a thick scar ran down his left cheek.” Yet Bea finds him utterly compelling. Her artistic muse comes alive when she’s near Huxley. And even when she finds out about his poker games (her father is a gambling addict), she still sees the goodness inside the rough exterior. Bea is honest and trusting to a fault, which causes her tremendous emotional pain from trusting the wrong people. But without those characteristics, she never would have found true happiness.

Huxley, the oldest of five boys, lives with the guilt of being the only Marlow boy to witness his father’s death in an act gone wrong. His father left his legacy to Huxley, and the weight of the responsibility is slowly killing him. When Bea comes into his world, he finds lightness and joy. He wants to be a better person because of her. And this is why their relationship works so well. They both come from dysfunctional homes, but rather than wallowing in the pain of the past, each recognizes they were loved and are able to fall in love despite their pasts.

New Orleans Rush is utterly sweet, giddy fun, and simply romantic. It truly is a feel good story in all the best ways. While Huxley and Bea seem like an improbably pair, they complement one other, bringing out the best in one another, and those around them. Bea’s joy of life is infectious. She’s learned the hard way that people will hurt you, but she doesn’t give up. Huxley is passionate and kind, knowing that life isn’t easy, but he also doesn’t give up. Together they are silly, sexy and charming.

Beatrice Baker may be a struggling artist, but she believes all hardships have silver linings…until she follows her boyfriend to New Orleans and finds him with another woman. Instead of turning those lemons into lemonade, she drinks lemon drop martinis and keys the wrong man’s car.

Now she works for Huxley Marlow of the Marvelous Marlow Boys, getting shoved in boxes as an on-stage magician’s assistant. A cool job for some, but Bea’s been coerced into the role to cover her debt. She also maybe fantasizes about her boss’s adept hands and what else they can do.

She absolutely will not fall for him, or kiss him senseless. Until she does. The scarred, enigmatic Huxley has unwittingly become her muse, unlocking her artistic dry spell, but his vague nightly activities are highly suspect. The last time Beatrice trusted a man, her bank account got drained and she almost got arrested. Surely this can’t end that badly…right? 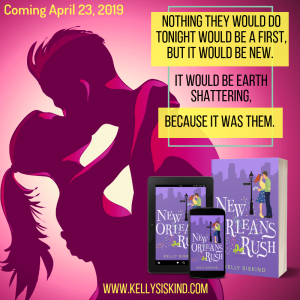 Add it to your TBR

A small-town girl at heart, Kelly moved from the city to open a cheese shop with her husband in northern Ontario. When she’s not neck deep in cheese or out hiking, you can find her, notepad in hand, scribbling down one of the many plot bunnies bouncing around in her head. She laughs at her own jokes and has been known to eat her feelings—gummy bears heal all. She’s also an incurable romantic, devouring romance novels into the wee hours of the morning.