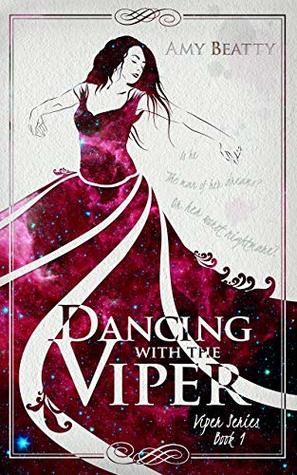 Dancing with the Viper took me by surprise.  Honestly, from the ambiguous cover art and title, I was expecting something a little campy like Robyn Peterman’s books.  That was reinforced when the book starts with main character Hanna Bradley taking a chocolate Bundt cake to her new neighbor, Jonantathinel of House Kanestelan Ehr. I mean what is the protocol for welcoming an alien to the neighborhood?  What I got as I continued to read was something more like Sharon Lynn Fisher’s Ghost Planet and I loved it. Dancing with the Viper is thoughtful and well-written.  Even though it’s short, the editing is good and it doesn’t feel slapped together.

At its heart, this is a lovely, soft romance between two damaged people, Jon and Hanna.  Jon just happens to be an alien.  He also happens to be ex-military with a deadly reputation. Jon is deeply troubled by what he has had to do in his military career and the reader has to think through some difficult questions about when it’s okay to use deadly force.  We have no problem watching John McClane drop bad guys left and right in the movies, he’s a cop, he’s protecting us from their evil acts.  We know this happens in war, but it’s largely hypothetical because it’s “over there.”  We don’t experience it the way soldiers do.  Jon knows who he is and what he’s done.  He has no illusions about that and wears the scars close to the surface.  He is also impossibly gentle with Hanna and we love him for it.  The reader has to reconcile his past along with Hanna.

Hanna suffers from PTSD as the result of a classic alien abduction scenario, but even after aliens arrive on the scene, no one believes her. Whether it is real or not, Hanna believes that it is and often relives the trauma of her abduction.  The reader gets them not as flashbacks, but as her nightmares, leaving us to wonder if they’re real.  They are vicious without being overly graphic. We understand the level of her pain without having to live it ourselves.

The relationship between Jon and Hanna grows very naturally over several months.  It’s not insta-love, or pheromones, or alien mating.  It’s just two people learning each other over time.  It’s subtle and the reader is lulled very gently into rooting for this relationship to work.

I had only two criticisms. The first is that the ending is too abrupt after a much too short climax.  We needed a little more action in a crisis that was long overdue by the time it happened.  And while we know there will be a second book, since there are many unanswered questions, I wanted a little more time to revel in the relationship Jon and Hanna reach after what has been building slowly and sweetly. There’s cliff hanger where the reader is left anticipating what comes next and then there’s walking into the elevator and falling down the shaft. Just nothing. I felt we were owed a cleaner ending.

My second criticism is that I wanted more history.  How did the Talessanins come to know Earth and begin to intermingle with humans?  Beatty has two short stories on her webpage which flesh out the alien history and arrival on Earth.  At only 242 pages, it’s my opinion that Beatty should have included them in the book as a prologue, but I suppose it will drive traffic to her page. Readers will enjoy them before or after reading the book.

Neither of these criticisms are deal breakers, more like wishes.  Beatty did an excellent job with her characters and making them real and their complicated romance real for me.  We have no date yet on book number two.  I will look forward to it impatiently.

In the eight years since the first Talessanin embassy ship landed on Earth, Hanna Bradley, like most other humans, has never met one of the reclusive extraterrestrials—and she likes it that way. Hanna’s life is finally going well. She has her friends. She has her art. She has her own cozy home. And it’s been months since the last bout of horrific nightmares left her weeping on the floor of her locked bedroom closet.

Then Jon moves in across the street.

Jonantathinel of House Kanestelan Ehr has left the intergalactic emperor’s service to settle in a small, quiet town on the empire’s newest planetary protectorate, Earth. But Jon isn’t just any alien ex-soldier. Jon has secrets.

When Hanna’s charming, yet intimidating new neighbor tries to spark a romance, the spark reignites the terrors of Hanna’s past, and she struggles to keep her balance as Jon’s ominous secrets whirl around her, and draw her in.