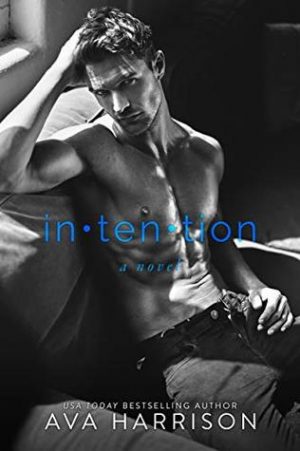 Madeline Montgomery is one half the love story Intention by Ava Harrison.  Harrison is another new-to-me author and overall I enjoyed this stand alone in her Legacy series. Madeline has a painful secret, one only she and her doctor know the breadth and depth of, and all the dominos that will fall as a result.  She’s CEO of start-up designer label Valentina Fisher. She’s devoted, driven, smart, and very good at what she does. I sincerely appreciate a good work ethic, but Madeline carries it to an extreme so she doesn’t have to think about her secret.  To me, it didn’t feel as big as she was making it out to be.  I didn’t sufficiently feel her pain or fear, probably because she was doing a great job of burying it, to feel the devastation that she was enduring.  Further, because she makes a good salary and comes from a supportive family, she had options open to her that wouldn’t be available to someone else with the same problem.

Nathanial Harrington is the other half of this love story.  He’s super rich, well-educated, and entitled, but he’s devoted to his grandfather and the legacy that became his when his father died in a car accident.  In a family this wealthy, there are always intrigues.  Nathanial’s cousin Edward is working hard to push Nathanial out of grace with the governing board of their textile empire.  Madeline and Nathanial meet when he buys her brand to prove to the board how ready he is to take over for his grandfather.  Part of that proof includes “settling down” or at least the appearance of it.  Nathanial and Madeline team up to give the appearance of stability for his family and the board.  In return, Harrington Textiles will give Valentina Fisher an influx of cash and materials to expand and make them a viable, high end brand.  They both have a lot at stake.

As they work together and socialize for the paparazzi, real feelings develop.  Both of them also have enough riding on the outcome of their faux relationship that real or not, it may not make it under the pressure.  As much as I liked Nathaniel, I had trouble suspending my disbelief.  He has every intention of taking over for his grandfather, but doesn’t work at the company—or at all.  He’s painted as a playboy until Edward’s threat becomes real, requiring him to step up to protect his legacy.  He does prove to be able, but it’s an abrupt change. He reminded me of the younger brother character in Sabrina (1995), played by Greg Kinnear:   “You’ve copied me on fifteen years of this company’s financials, you just assumed I never read them.” The reader had no connection to  Nathanial between the time he graduated from Oxford to the time he’s ready to run a multi-billion-dollar company.  I’m not sure it plays out without Greg Kinnear’s dimples. It’s a fairly rapid read and the writing is good, but it feels like the characters inserted into this quasi-flawed premise are not fully developed.  I’ll try Harrison again.

I had it all. Dream job, fancy apartment, great family. But there was one thing I didn’t have. Would never have. Then he showed up. Rich. Arrogant. Condescending. He came to me with an ultimatum, and I had no choice but to agree. I needed to convince the world that I was Nathaniel Harrington’s girlfriend so his legacy would stay intact.

Spending time with him would be difficult. And fooling the world would be even harder. But persuading my heart into thinking that his kisses meant nothing and that his gentle touches were all in my head, would be impossible. I was falling for him. But fate had other plans. Our time was limited. Because I knew the truth. A truth that would end us.