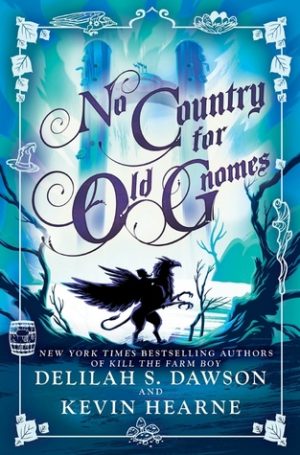 No Country for Old Gnomes is the second tale set in the fantastical kingdom of Pell, a land filled with mythical creatures, silly misfortune, and heroic deeds. This time around, gnomes are under attack by the drubs, a halfing gang known as Dastardly Rogues Under Bigly-Wicke. After his gnomeric home is bombed, Offi and his family head to a refugee center, where he meets up with a motley crew of unlikely heroes. Together, the merry band sets off to find the king and restore law and order to the land.

No Country for Old Gnomes is a new adventure in the lands of Pell, separate from the first book. However, several of the previous characters make appearances in the story, with some, like King Gustave, playing a critical roll. But this is a standalone tale, and one could pick up the book without having read Kill the Farm Boy.

As in the first book, the humor is witty and fun, although sometimes the silliness seemed to get in the way of the tale. The play on words is fabulous: things like “Dique” and “smöl” and “Foine” all made me smile. The combination of subtle digs and pop culture references along side blatant ridicule and humor is brilliantly written. Yet… I struggled.

Although I enjoyed my return visit to Pell, meeting a whole new cast of characters, and revisiting familiar faces, it took me nineteen days to get through this book (about 4 times longer than usual). I loved the premise of the plot and found the group’s quest both noble and entertaining. But I struggled to get through this one. It’s not that it was bad; I just never could get into the story whole-heartedly. The storytelling is choppy, with the group going from one situation to another, each time meeting new people, finding new danger, etc. Although there is a cohesive mission in their journey, the constant interruptions, and often outrageous side quests, proved to be too much distraction, never allowing me to submerse into the adventure fully.

If you are a fan of Terry Pratchett’s anything-goes humor and storytelling, I urge you to give The Tales of Pell series a try. It’s a lot of fun, just not for everyone.

The Skyr is a rich, verdant land claimed by both halflings and gnomes. For centuries, the halflings have worked to undermine gnomish power structures and seize total control–through legal means, certainly, but more insidiously through their extensive organized crime network. Now, threatened with being pushed out entirely, the gnomes are desperate and ready to fight back. Gustave the Goat King faces his first test as a leader: Can he bring peace to a fraught region or will a civil war consume the entire kingdom?

Reviews in the Series:
Kill the Farm Boy by Kevin Hearne and Delilah S. Dawson (The Tales of Pell #1)