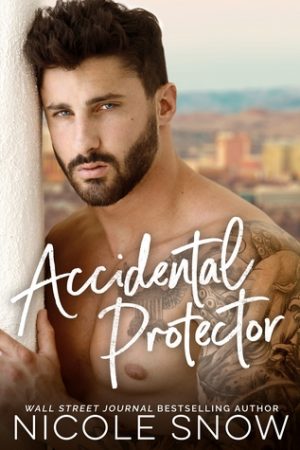 This is a set of books that I actually bought off an Amazon FaceBook ad.  No joke.  Can’t believe I did that, but I liked the idea that marriage rather than lust alone was a central theme to the predicament of each set of main characters.  The recently released Accidental Romeo was the one that hooked me initially, and because I was in full escapism mode, rather than unpacking boxes from a whole house move, I bought and read the other two inside of three days.  Snow has done the thing I’ve been whining about missing for a long time—she wrote three totally stand alone books that are part of the same series, not because they share details, but because they share a format.  And that’s all.  If you like the format, you’re ready to indulge. None of the books even mentions the previous books. So refreshing to sit down with one book and be done. I’m kind of over contrived cliff hangers.

The format…impossibly good looking alpha male with military background now working in some form of security in the civilian sector, lots of tattoos, someone to protect from legitimately evil people, strong but misunderstood female leads who learn that having the right partner can build you up rather than diminish you.  All three couples give each other nicknames. In all three books the male leads have a problem from their past that has invaded their present, making for a dangerous situation.  In all three books the female leads get pulled into said dangerous situation unwittingly and are not content to sit on the sidelines while their male counterpart “saves them.”  In the process, the alpha males learn they too need the strength of their partners.  What makes the addition of marriage into these books fun, is that marriage also includes family, tradition, and responsibility, not just longing and yearning.  Those other pieces make a relationship so much more complex that these books were a part of my day that I looked forward to.

I liked Accidental Protector the least because the female lead was out of her element.  Her relationship with her male lead began when she ran away from her problems.  She did it to start new, but she wasn’t starting new so much as she was hiding, and it diminished the strength she brought to the table. She did find it later in the book, but it was a long time coming. Also, because she had no real home base, she was dragged around more by the behemoth trying to protect her. It felt like a less equal relationship.

My final criticism is the use of the “C-word.” I don’t know if Snow felt because her males leads had coarse backgrounds that her vocabulary should be as well, but it felt way out of place for me. I just don’t think it belongs in a consenting intimate moment, even one fueled with adrenaline and urgency.  I would love to hear your comments, are there certain words that are never appropriate in a romance novel? 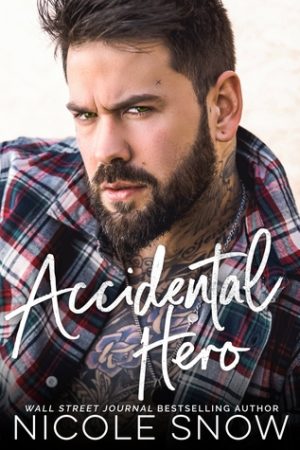 It was one freaking kiss with a stranger. I wasn’t looking for a hero the day Brent Eden charged into my life. He saw a damsel in distress facing humiliation. We played pretend. Swore I was his. Baited sweet chaos. Blew apart everything.

Especially when my gossipy cousin tells the whole family.

Forget how he’s badass personified. The ink. The leather. The abs. The smirk. The lightning eyes and the growl I can’t resist.

Nothing changes the fact that he’s my favorite student’s father.

I’m risking it all for this charade. And I’m losing.

The closer we get, the deeper I fall. The louder he vows to protect me. The more we come undone. Even my questions have questions. What if I’m not the only one who needs saving? What if our marriage mistake gets way too real?

Waking up next to the world’s hottest stranger is my first red flag.

The huge rock on my finger? Hint number two I’m head-over-heels in trouble. I’m hair-on-fire freaked by the marriage certificate. Then I sit down with Noah Bernard, my mysterious new “husband.”

He talks a good game. Easy, when he’d put Hercules to shame.

I came to Reno to reinvent myself. What’s a pretend wife to do with a tight-lipped temporary badass? Sweet revenge, for one.

Hello, unintended consequences. After Noah finds out, there’s no hiding the truth. I know why there’s this darkness in his eyes. I learn how bad my lips can ache for one more kiss. I see him face down hell itself. Protecting me. I keep asking the inevitable: what if the divorce papers can’t undo love? 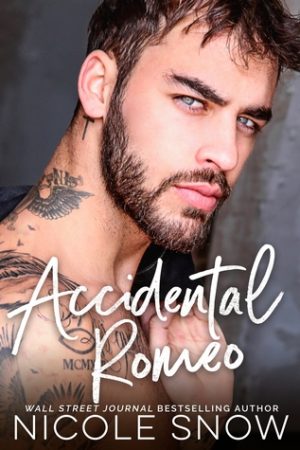 A perfect stranger just kissed away the worst day of my life.

Emphasis on perfect. Hunter Forsythe is so far out of my league I can’t even buy tickets. And now he’s insta-date to my stuck up sister’s wedding?!

Brace for everything to go hilariously wrong. But my mysterious new hero is no flipping joke. Rich as sin. Knockout eyes. A snarlypants single dad. Muscle, muscle everywhere. Too good for the quiet baker girl no one ever noticed.

Then I find out what – and who – put him up to this insanity.

I’m so mad I could spit nails. Imagine my surprise when Romeo keeps coming. Hear my door slamming in his face. Witness my jaw hanging when he starts wooing me for real.

Dream dates, family dinners, and soul-branding nights. I’m in full Juliet mode before I see the crack in his world. The longing. The loss. The secrets. The danger. Does love even fit in Hunter’s jagged heart? Or is a Shakespearean tragedy in our stars?