Tierra and the Warrior 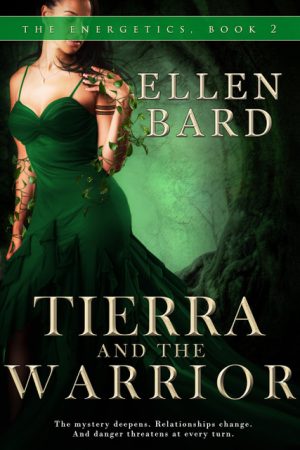 Before Fintan had taken more than two steps, she’d caught him. Her vines, thick, strong and supple, reached out of the earth and wound themselves around his muscled calves. He glanced down at them, his eyebrows raised. “Tierra, what the hell are you—”

The vines grew quickly, and she drew them up his body, and wrapped them around his skull, so his jaw was bound. His eyes narrowed, though he seemed merely irritated, not angry.

She, on the other hand, was furious. The tight ball of emotion that had sat so heavily on her chest exploded through her body, and the earth shook. Fintan, his legs tied by vines, fell. She wrapped more vines around him and he made a stifled noise, struggling. He glared at her as he tried to speak.

“I’m showing you I can protect myself!” The words burst from her. “I’m not helpless. I was surprised yesterday. I can do this, Fintan!”

He stilled, and cocked his head, considering her from his position on the ground. He nodded once, and she felt him pull his power, Manipura, fire energy. She forced panic down. Was he going to defend himself? If so, she needed to show him she knew what she was doing. Because she did, didn’t she?

She did a fast scan of the environment. What might he do? Ah. He could burn through the vines.

She used her power to lower some of the longer, higher branches, tying the vines to them and lifting him high, high up in the air. He’d be a lot less likely to set alight the branches from up there, where he’d fall if he freed himself.

She tipped her neck to stare through the boughs. He wasn’t struggling, but watched her with the patience of a hunter. The pleasant glade hummed with power, the animals and birds hushed. She bit her lip. Having that assessing gaze directed at her was disconcerting.

She wanted to talk to him, explain, before he did anything rash. She sent her power into the trees, and several branches bent towards her, their leaves whispering gently. She stepped onto one, held on to another, and lifted the branches up so she was close enough to Fintan that he could hear.

It had taken less than a minute, and she’d neutralized him.

“I. Can. Protect. Myself.” She shook a little with the aftermath of the adrenaline that had flooded her system. “Stop seeing me as the little sister you need to control, and treat me as an equal. A partner. Because that’s what we are for the next day or two. If we don’t work together effectively, we waste time, not just for us, but for everyone. What’s at stake here is a lot bigger than the two of us. Do you understand?”

She released the vines that bound his jaw.

“You made your point. We’ll train later, and I’ll show you exactly why you do need me. Let me down.” A vein pulsed at his temple. Okay. Perhaps he wasn’t so relaxed about what she’d done.

“I wouldn’t have needed to do this if you weren’t such an arrogant idiot.” She moved her branch a little further away.

“Arrogant? Me?” His hands, down by his hips as he was still wrapped in the vines, balled into fists.

“Yes. You. Just treat me as if I was any of the others. And let’s move on.” She drew on her energy to take them both back to the ground and release him.

“Okay. I’ll treat you like any other Warrior who tried a trick like this,” said Fintan, grimly.

The hum of power around them intensified as he pulled energy. A heartbeat later, he burned through his bonds, and he propelled himself over to her branch, his weight sinking it, and them, to the ground at an alarming rate. Oh. Apparently being up high wasn’t the deterrent she’d thought it would be.

He, anticipating the landing, took it in a graceful roll, whereas she tripped as she landed, and had to put an arm out to catch herself.

As he came back up to his feet, he dived and snaked his arm around her throat, lifting her head up at an awkward angle. Fire rose up around them, heating the air.

Oh dear. She was trapped in a circle of fire with an angry fire energetic.

Her back and butt were pressed into him, and his solid arm was hot against her neck. She could hear the rasp of his breath in her ear. Her brain fogged over.

And then her anger was gone, chased away by a pulse of something that was one part fear, and – disturbingly – three parts arousal.

Tierra, an experienced earth energetic who values safety and home, has been caught up in a dangerous prophecy. She’ll need to work with one of her best friends, Fintan, a fire Warrior who enjoys risk and battle, to help solve some of the mysteries of the prophecy.

She’s frightened, and he’s protective. But her skills and wisdom are crucial to their success. If she doesn’t step up – and he doesn’t let her – they’ll never succeed.

Can she handle being front and centre in the conflict, and the change in her feelings for Fintan? 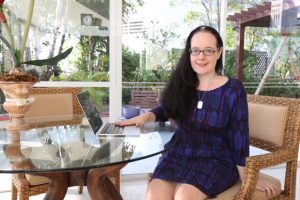 British born psychologist, management consultant and digital nomad Ellen Bard has traveled extensively, studied yoga and Krav Maga (though she still considers herself a beginner in both), is obsessed with productivity and personal growth, and reads voraciously. She currently lives in an apartment nest in Bangkok with her Fox, where she (almost!) never has to feel the cold.